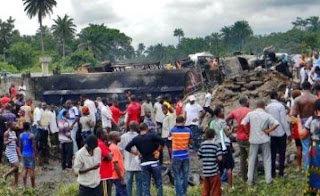 An explosion occurred at the weekend at the Nigeria National Petroleum Corporation (NNPC) pipeline located at  Olorunkemi/Alaakia village along Elebu Road in Ido Local Government Area of Oyo State.

Though nobody was sighted at the scene of the blast and the consequent fire that started at about 9am, residents of the community who spoke with Sunday Sun said it was caused by pipeline vandals as their activities had been on the increase in the recent past.

One of them, Mrs. Oladele Funmilayo, said  she was inside her room when she heard a loud sound that sparked the fire.

“I had to rush out of the room with my children. We were so scared that we didn’t know what next to do except to run away”, she said.

Funmilayo said other residents later contacted men of the State Fire Service that rushed to the scene to put off the fire.

Another resident, who simply identified herself as Mrs Innocent, likened the sound of the explosion to a bomb blast. “We thought it was a bomb blast and we rushed out of our homes. We know it was the handiwork of pipeline vandals”, she stated.

Director of the State Fire Service, Mr. Kareem Oyekunle Gafar who led his men to the scene, said the activities of pipeline vandals caused the explosion, adding that the fire service immediately responded to the call of residents and went to the scene. He stated that the fire service team faced serious challenges, as it could not easily access the scene of the explosion due to the muddy nature of the road. “We had to pass the pipe supplying water along the bush, to ensure the fire was put off.”

He said the fire was eventually put off by the combined efforts of his team and NNPC personnel.

“We brought 37,000 litres of water to the scene and we exhausted it. We had to send for another supply of water. We brought two water trucks; one was 22,000 litres and other was 15,000 litres. The NNPC brought their water too and we battled with the fire”.

The Chairman of Ido Local Government, Prof. Joseph Olowofela who rushed to the scene told newsmen that, “though I have not confirmed the cause of the fire, I am sure it must have happened due to the activities of pipeline vandals.”

He called for the combined efforts of security agencies and the local government  to nip the activities of the vandals in the bud.