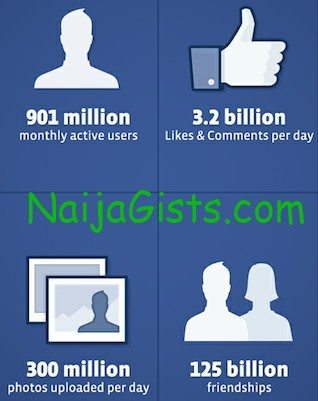 The latest facts and figures about Facebook, which priced its initial public offering: – Facebook has more than 900 million active users. If the company were a country, it would be the third largest in the world after China (population: 1.34 billion) and India (population: 1.17 billion).

Over 488 million people use Facebook on mobile devices. That is more than half of its members worldwide, and the reach is even bigger in countries such as South Africa, Nigeria and Japan, where mobile use is 70 to 90 percent. (source: socialbakers.com).

– With 157 million members, the United States has the most Facebook users. Brazil recently jumped to second place with 47 million, followed by India with 45.8 million, Indonesia with 42.2 million and Mexico with 33.1 million. (source: socialbakers.com)

– Facebook is the most popular social network in every country of the world, with the exceptions of China, Japan, Russia, South Korea and Vietnam. (source: comScore)

– In April, Facebook announced a billion-dollar deal to buy the startup behind wildly popular smartphone photo sharing application Instagram, its biggest acquisition to date. The US Federal Trade Commission is reviewing the deal.

28-year-old Mark Zuckerberg’s net worth was estimated at $17.5 billion on the 2011 Forbes list of the wealthiest Americans.

Moskovitz had a net worth of $3.5 billion but pipped Zuckerberg for the title of world’s youngest billionaire, being eight days younger.

– Facebook says it had an average of 526 million daily active users in March 2012, an increase of 41 percent from a year ago. It had registered 125 billion “friend connections” as of March 31 and 3.2 billion “likes” and comments.

– “The Social Network,” the 2010 film about the origins of Facebook, won four Golden Globes — including for best picture and best director — but flopped at the Oscars, walking away with only awards for best adapted screenplay, original score and film editing.

– Facebook, which currently employs some 3,500 people, has announced plans to hire “thousands” more over the next year. Some studies suggest that Facebook-related firms and apps have created many more jobs and economic value (AFP).