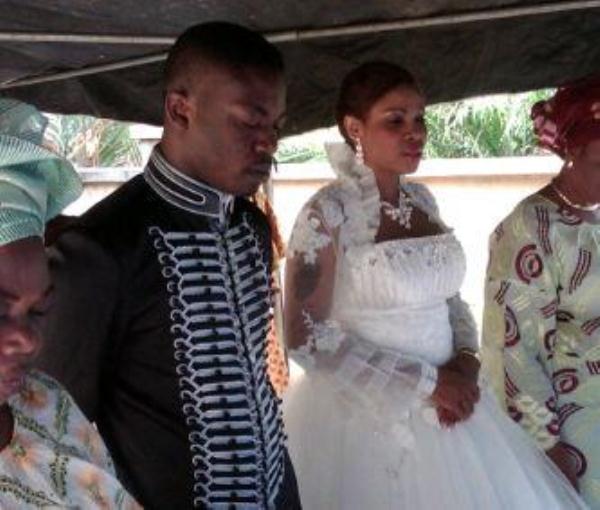 After just 6 months of marriage, top Nigeria‘s music producer, K-solo and his wife, Kikelomo Akinkunmi are set for divorce. naijagists.com 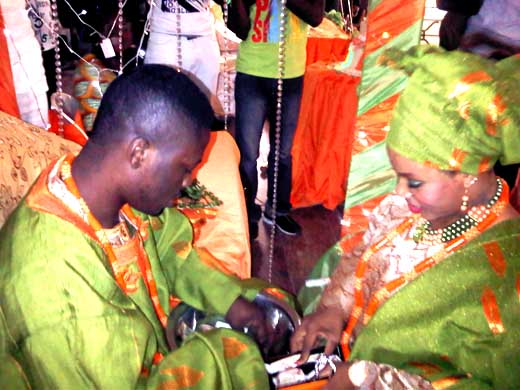 The couple met on Facebook few months before their wedding in November of 2011.

Read the read story below

K-Solo and I met on Facebook in April 2011 and continued our friendship on Blackberry. We eventually met face to face at a show in Eko Hotel in Lagos. I am not really based in Lagos. I am always in Warri, Port Harcourt, South Africa or Cameroon. I am always traveling because of my business. But because of K-Solo I started coming to Lagos frequently after we started dating.

By August of 2011 we started having issues. He was actually scamming one girl. One Leilani Ifeoma in Houston, Texas. Apparently they have not met physically, they met on the internet and she was also into entertainment so K-Solo started scamming her, collecting money from her and promising her marriage. The day I got to know I was in his house.

He left his phone and stepped out, so I picked the call and I told her I am K-Solo’s wife  and the lady said it wasn’t possible because they were planning to get married. When I asked him about her, he said please don’t mind her, and later said he was sorry. But when I continued to demand for answers, he started beating me despite the fact that I was pregnant. He carried a lamp and threw at me.

Before then, when I met him, he told me he wanted to shoot a video for his song ‘Ni Igboro; and said he didn’t have money for it. I gave him N515, 000 for the video shoot. I gave him another N100, 000 some weeks before the video shoot. All through this I didn’t know he had a girlfriend that he had been living with for seven years. Each time I go to the studio, I see her there with a K-Solo tattoo on her arm. When I asked him who she was, he said she was his sister’s daughter. I later found out that when I gave him the money for the video shoot, he used half of it to celebrate a birthday for Bimbo.

A few weeks later, the lady in the US, Ify, called his phone and I picked it up. When I told him I’d picked his call, he got angry and went outside the house to go talk with the lady. He was begging the girl and lying that I was his sister. He even asked her if she was ready to sponsor their wedding. After listening in on the conservation, I told him then and there that the relationship was over, that I wanted my N515, 000 back. Not just that, I’d spend a lot of money on him. He started begging and crying. A few days later, I traveled to South Africa.

While in South Africa, he kept calling and begging and I eventually forgive him because I was pregnant and he convinced me he was a changed man. He actually told me he had gone for deliverance. That was when we decided to get married.

The only money K-Solo spent on the wedding was N15, 000 for wedding invites. I took care of everything. The cloth K-Solo was wearing, my own, his pilot suits, clothes, shoes, bag his mum wore, the feeding and drinks. I did everything. I spend over N3.5 million.

I got scared and first thing in the morning I called my brother and told him what happened. He advised me to move all my documents, chequebooks out of the house, which I did. Whenever I asked for money for feeding or upkeep, he would shout at me and say ‘What’s the meaning of that? Don’t you have more money than me? What did I marry you for?

K-Solo started beating me up after the wedding and I lost the baby I was carrying when we got married on the 26th of November.

The marriage finally crashed in February 2012 when he called me and told me that Timaya just bought a Nigerian used Range Rover sport, that he wants me to buy him a brand new Range Rover worth 7.5 million and also put N10million in his account. I told him that even if I had the money, I won’t do it because I expect him to talk about how to invest money in productive business and not buying Range Rover.

Moreover, I gave K-Solo N2million to pay for house rent for our 4-bedroom home at Ogba Medium estate, but he only gave the agent N1million and squandered the remaining money to buy Hublot wrist watches, Blackberry phones expensive shoes and designer wears.

When I pointed this out to him, he told me that he will make the marriage miserable for me. On February 14th, after a misunderstanding, K-Solo packed a few of his things and moved to his mother’s house. I left our home too but was advised to go back since our marriage was still young.

Because I wanted to make it work, I took my brother to K-Solo’s mother’s house to apologize to him and his mum. He later returned home. But immediately he returned, he asked me if I was ready to buy him the Range Rover and I told him it wasn’t going to happen.

So in March we went to Shop-rite and he wanted me to buy two wine glasses that cost N2, 500 each. I suggested that we should open our wedding gifts that there definitely will be wine glasses somewhere, and he just slapped me right there in Shoprite, and as he was coming close to me I ran into the car park, he ran after me, removed his belt and started beating me.

People started taking pictures of us and some guys tried to drag him away, by then, my right eye started bleeding. While they were trying to calm him down, he ran away from them and went to carry a stone and threw it at me, and I just passed out. I woke up in the hospital and what he told my family was that I fell. he started begging me and crying that it was the devil’s work.

After that beating, I stopped doing everything I used to do financially in our home and he became very frustrated and aggressive. But the marriage finally packed on a particular night I came back home late from going to buy fruits for the house. Immediately I entered the house, he got up and started shouting at me.

He started coming close, and I tried to leave the room, but he dragged me back, locked the door and threw the key in the drawer. He started beating me, slapping me and broke a coke bottle on my forehead. I stood up and ran to the bathroom, he followed me, took the mopping stick, broke it and started hitting my stomach that I must the pregnancy must come out. By then I was pregnant again.

They tried to take me to the hospital but K-Solo prevented them. So I was bleeding from 11pm to 7am the following morning, whih was when they finally took me to the hospital. By the time I returned from the hospital, he had moved his things from the house. That was when I discovered that he my trinket box with gold over N2.5million was missing and this was not the first time he’s stealing from me.

I wrote a petition to the commissioner of police and on May 29th, the police went to pick him up. The case is with the police and I told them all I want is my trinkets back and for him to sign an undertaken that he will never touch me again and threaten to kill me. He has said he’s not the owner of the pregnancy, which is fine with me. I don’t want him to come close to the child and the child will not bear his name.(culled from City People Magazine)