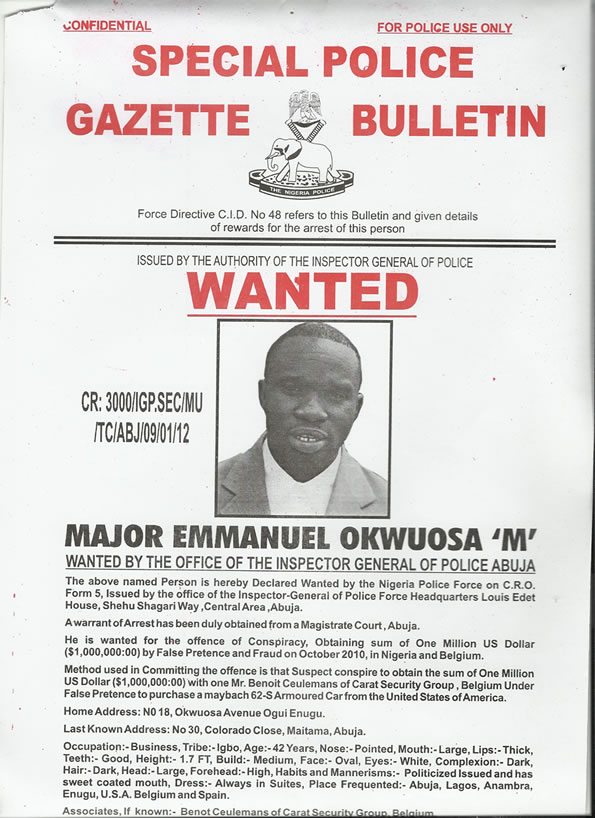 A Nigerian businessman, who parades himself as Major Emmanuel Okwuosa, has been declared wanted by the police over $1 million(about N159m) fraud. naijagists.com

Major Okwuosa, according to a special Police Gazzette Bulletin, issued Sunday under the authority of the office of the Inspector-General of Police, Abuja, is alleged to have obtained the amount by false pretence in October, 2010.

The offence, according to the police, was committed in both Nigeria and Belgium.

The police said Okwosa, who is believed to be 42 years old and whose two addresses were given as 18, Okwuosa Avenue, Ogui, Enugu and 30, Colorado Close, Maitama, Abuja, “conspired with Mr. Benoit Ceulemans of Carat Security Group, Belgium under false pretence to purchase a Maybach 62-S armoured car from the United States of America.”

The police said they obtained the warrant of arrest a Magistrate’s Court in Abuja.

According to the bulletin declaring him wanted, the suspect is an Igbo man with pointed nose, large mouth and thick lips.

Further description of the suspect shows that he has large eyes, dark skin and “has sweet-coated mouth.”

He is always in suits and frequents Abuja, Lagos, Anambra, Enugu, USA, Belgium and Spain.