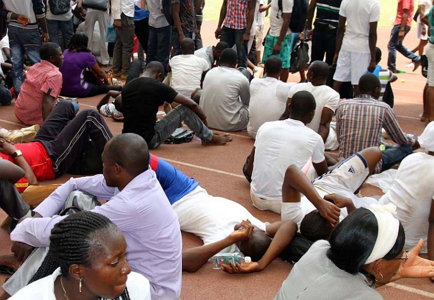 Edo State says the persons behind the fake recruitment agency that defrauded over 500 job seekers in Benin City, of millions of naira, for nonexistent jobs, have been arrested by the police.

According to the Special Adviser to the Governor on Media and Communication Strategy, Crusoe Osagie, an official of KAI Consulting, the fake recruitment agency has been arrested by the police.

“He claimed that his organisation wrote a letter to Edo State Government in November 2017 seeking recognition and partnership with the state on environmental issues.

“Chukura told security agents that KAI Environmental is a voluntary organisation operating in Delta State with about 60 workers,” Osagie said.

The governor’s aide further said that Chukura is being interrogated by the police to explain the roles of his colleagues in the employment scam.

The news of the employment scam broke few days ago that over 500 job seekers in Edo State were made to pay over N10 million for jobs, by KAI Consulting, which claimed that it was recruiting workers for the Edo State Ministry of Environment and Sustainability.

But the Commissioner for Environment and Sustainability in the state, Omoua Alonge Oni-Okpaku, debunked the claim and said that all state government jobs are handled by EdoJobs, a government jobs portal.

Media reports quoted Chukura as saying that KIA Consulting received 113 applications from applicants who paid them for training them in preparation for their recruitment into the government agency.

He admitted that the Chief Executive officer of the agency collected about N180, 000.