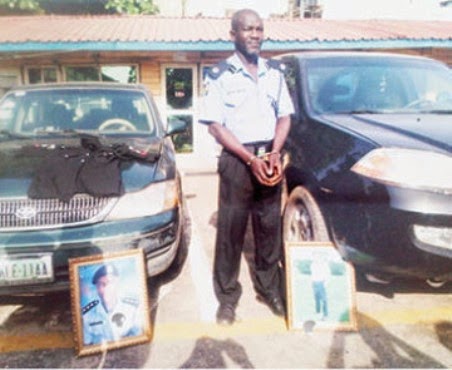 Not the real picture

The Police in Delta said it had arrested one Mathew Ochoche parading himself as police corporal, while escorting a vehicle loaded with industrial machineries in Warri.

This was contained in a statement Police spokesperson in Delta, DSP Celestina Kalu, in Asaba on Saturday.

“The vehicle was loaded with fairly used Mikano SP 20 generator and Denyo Daw-18083.0 KVA welding machine.
“The vehicle was being escorted by one Ochoche Matthew ‘m’ who was fully dressed in police uniform with F/No. 255038 and Cpl. rank.”

The statement said Ochoche claimed to be a serving policeman attached to No. 20 Squadron, Police Mobile Force, Lagos.

“However, preliminary investigation revealed that the suspect, who previously served with 20 PMF Lagos, have since been demobilised.

“Our investigation revealed that Ochoche was demobilised from the force on July 18, 2011. Mathew is no longer in the police service,” it stressed.

The statement added that the suspect was arrested for impersonation and is undergoing investigation and that the vehicle and the exhibits he was escorting had been impounded.