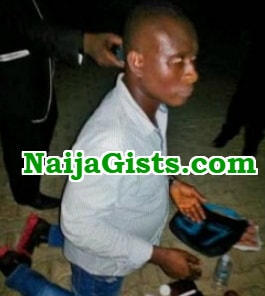 Pastor Dayo Seun, a 24-year old self acclaimed prophet  who moved about the streets of Lagos like hawkers to solicit for people he will deliver from evil spirits has been arrested.

According to the PM Express,  the suspect landed in trouble after he was arrested close to First Bank PLC branch at NNPC junction in Ejigbo where he ambushed two brothers, Kazeem Hammed and Ibrahim Kazeem and defrauded them under the false pretence of delivering them from evil spirits.

It was gathered that Seun and others now at large usually went to the banks around the area to deceive customers who went there for transactions. They also used to visit the tanker drivers at the NNPC depot to offer prayers and false prophecies in order to obtain money from them.

Many people were surprised how Seun and his accomplices had managed to defraud victims who were said to have gone to the banks to withdraw money. The suspect was said to have accosted the victims and prophesied to them that they will die soon because of the hand of enemies in the lives.

However, after the prayers the victims went home and informed their neighbours of their encounter, how a pastor prayed and delivered them from the hands of death. It was then one of their neighbours who knew Seun very well informed them that Seun was a notorious fraudster who just returned from prison for a similar offence.

It then became clear to the victims that they have been defrauded; they went to Ejigbo Police Division and reported the matter. The police trailed Seun, arrested and detained him at the police station. During interrogation he informed the police that he had no such powers to deliver any person from evil spirits.

He was charged before Ejigbo Magistrates court for conduct likely to cause breach of public peace and obtaining money under false pretence.

The Presiding Magistrate, Mrs J.O.E. Adeyemi Ajayi granted Seun bail in the sum of N50,000 with two sureties in like sum. The prosecutor, Supol Keneth Asibor did not object to his bail but identified Seun as a defendant who had a similar matter at the court. He was remanded in prison custody pending when he will perfect his bail condition. The matter was till 19th March, 2018. [PM Express]