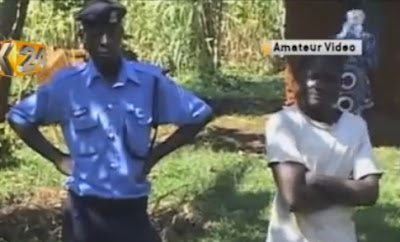 August 16, 2016 – Family Caught On Video Beating Up Corpse Of Man Who Committed Suicide In Kenya

In a rather bizarre move, area residents of a village in Kakamega Kenya decided to take law into their hands when they took cane and beat up the lifeless body of a suicide victim.

The late man identified as 36-year-old Alusiola Nimrod was found dangling from the roof of his house.

Residents and family members of the deceased brought down the body before venting their anger on the his corpse.

However it was stated that the act is a tradition in the community.

Watch the video below… VIEWERS DISCRETION IS STRONGLY ADVISED