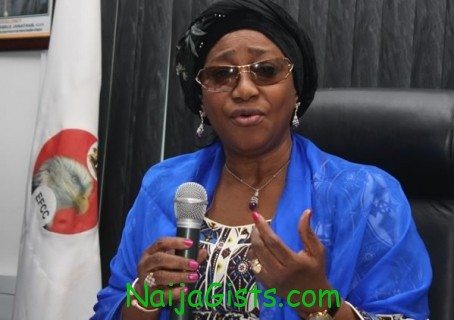 Yet another secret have been exposed according to the Global News Magazine Nigeria, this shocking story will sure thrill you.

What you are about to read look like thriller but its real and it
happened in Farida Waziri’s EFCC where she presides and run the place like  her business empire.One of the inmates
recently detailed how gold loving Waziri visited the EFCC office at the dead of
the night to harass inmates and threatened them to confess. Excerpts

I make this incident report on behalf and at the request of all the current inmates of the EFCC detention facility at the Okotie Eboh Street,
Ikoyi, Lagos. I do so fully aware of the dangers and consequences of disclosing or pointing out any of the ugly truth about the EFCC. Yet, I am certain that this report is proper under Nigerian Law and Constitution. Around midnight on Friday, Nov. 11, 2011, as the inmates of this cell were sleeping, the EFCC guards on duty rushed into the cell block ordering and urging all the inmates to get up and step out because the chairman of the EFCC wanted to see all of us.

We quickly got out our cells, scrambling to put on some clothes. There was much confusion as most of the inmates waking from sleep tried to figure out what was going on. But within minutes, we all lined up in the hall way. The guards matched us out of the cell into the yard separating the cell block and the offices of the facility. There was no light in the yard, as there had been power outage all evening. Flash lights were flying in all directions as some as some EFCC staff and gun  wielding policemen hurriedly moved about in the yard and around the inmates. naijagists.com

As we stood in three columns in front of the cell building, we could make out the figure of a lady in a Nigerian traditional dress sitted on the walkway across the yard and making or taking calls on her cell phones. Standing around her were some EFCC staff and two policemen. We figured that must be the chairman of the EFCC. Otherwise, it was not possible to make out the face of anybody in the darkness.

As the lady sat and faced in the direction of the inmates, the cell guards, assisted by the other EFCC staff, made a roll call of the inmates. We all answered as our names were called. After the general roll call, they called out the names of those inmates who the names of those inmates who were being detained pursuant to court orders. They were separated from the rest of us. The guards were calling from the list in their hands illuminated poorly with their lights.naijagists.com

At this point, the chairman of the EFCC stood from her chair, which was about 12 feet from where the inmates stood. She began to address the inmates by asking about those whose cases had been charged to court. The first person she called upon was asked what he did. She probably meant to ask what offence the person was changed with, or alleged to have committed, if not yet charged with. The next person she called upon was Alhaji Danjuma. She asked him what he did. Danjuma said he did not really do anything.

Indeed Danjuma’s story has been that he owed someone money and was making arrangement to pay it back like in any contractual debt obligation. However, his creditor reported him to the EFCC and he was arrested and has since been abused by the EFCC staff. Consistent with his story, he responded to the chairman of EFCC by saying that he had not committed any offence. But the chairman looked at the paper against Danjuma’s name and accused him of lying. naijagists.com

She insisted that Danjuma committed an offence. She came to this position just because the letters “OBT” were marked next to Danjuma’s name. This meant, of course, only that those who arrested and detained Danjuma chose to accuse him of that particular offence. Otherwise, the paper before the chairman made no reference to evidence or circumstances of the case. The chairman was clearly intimidating the man and she insisted that he was a liar. Danjuma had no choice but to keep quiet.

The next person he chairman spoke to was Hamisu, Danjuma’s cousin. His only offence was that he was that he was the messenger that was sent to pick up an envelope from the creditor. Indeed the EFCC officers had made it clear that they were detaining him for the sole purpose of pressuring Danjuma to cooperate with them, whatever that meant. The chairman had no patience to hear Hamisu.

She stopped him in mid sentence and moved to the next person who was a man that could not speak English. As someone tried to translate for the man, the Chairman said it was taking too long. She stopped it.

Then the chairman called upon an inmate an inmate known as Engineer Francis, a 60-year old man who has been held in detention without
being charged to court since August. His offense was that he had introduced a man who wanted to borrow money, but lacked collateral, to another man who provided collateral for a fee. Francis had no further involvement in the loan process and Francis never expected or received even a dime from the transaction. When the borrower could not pay back the loan, the creditor went to EFCC, which decided to arrest Francis for introducing the men. The brief exchange between the chairman and Francis was very revealing of how the mind of the chairman works and her understanding of the law and attitude to law enforcement. naijagists.com

When Francis summarized his case, the chairman cut in, saying that he was guilty of the offence of introducing someone. The chairman insisted it is an offense under Nigerian Law to introduce a borrower who defaults on the loan. When Francis tried to explain to the Chairman that he did not guarantee the loan and that he was not a party to the loan agreement and was not even present when the loan agreement was signed, the chairman ridiculed him, calling him a pocket lawyer and told him that was why he was so emaciated and looked small in size.

At that point, two of the EFCC staff in a bid to help their chairman began to say that Francis was guilty of the offense of conspiring to introduce somebody to somebody. naijagists.com

The chairman clearly had no patience to pursue any subject at all. She turned and began to address the entire inmates. She said that we were all guilty of whatever offence we were accused of. She urged us to confess in order for us to receive mercy. She threatened that unless we confessed she was going to send any of the inmates she pleased to Adeniyi Adele and Panti. She said that in those places we would have to prepare our wills.

The two places she mentioned were two police detention cells known for extreme brutality, torture and extra judicial killings. When she made this threat, the EFCC staff around her laughed knowingly indicating their common awareness of such extraordinary rendition. For anyone to be sent to any of those two places is literally to be sent to a gas chamber. There was a grave silence among the inmates on the mention of the Chairman’s plan for “non-cooperating inmates. The silence and the terror were palpable in the eyes of the inmates. naijagists.com

After issuing the chilling threat, the chairman of EFCC turned away indicating it was the end of the visit which lasted approximately
45 minutes. The end was so abrupt that everybody understood that the main purpose of her visit was to send a message to someone that she capable of extreme cruelty and causing a slow and painful death. I did get that message, even though she clearly avoided calling on me.

The inmates were returned to the cell. They were all horrified visibly worried and greatly agitated. All were disappointed at the cold and tendecious and callous behavior of the EFCC chairman. Where is the humanity? Where is the professionalism? Where is the common sense of it all? All these seem to be questions in worried minds of the inmates. Many began to pray about it.

Beside the collective feelings of the inmates, which I shared in entirely, I understand that what happened tonight had very profound
personal meanings to me. EFCC’s leadership had just demonstrated to me that it had no limit to depravity, cruelty and impunity. In view of the deep disagreement between the EFCC and me and my continued criticism of their brutality and massive abuses there is no doubt the leadership of EFCC has a death wish for me. I was just reminded how easy it is for them to accomplish that wish.

In light of what happened tonight, it is clear to all inmates of EFCC cell that they would not be allowed their due process rights while in the custody of EFCC. Many of them have suffered greatly as EFCC officials systematically trampled upon their rights and their fundamental liberties. It is now clear that what they had thought were aberrations from individual officers of the EFCC are actually the real operating procedure of the commission. These inmates are now urgently looking to share their predicament with the world. Tonight’s visit by the Chairman of the EFCC cell leaves no one in doubt.(Credit: Global News)