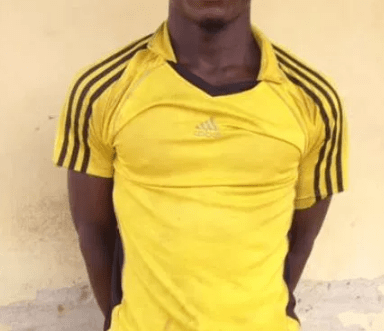 The Police in Enugu state has arrested Mr. Sampson Nwaobasi, an Enugu-based farmer,who allegedly killed his business partner, Mr. Friday Ani, over payment of proceeds made in farm business.

Spokesman Ebere Amaraizu said in a statement on Monday in Enugu that the incident happened on July 31 at Agbani community; while the suspect was arrested on August 7 by operatives.

He said the deceased and Mr. Paul Eze were partners in the planting of cucumber, as the deceased and Eze had raised money for the suspect, who does the farming, sells same and shares profits.

“It was gathered that his victim, Ani, a student of the Enugu State University of Science and Technology and his business associate met his untimely death when he demanded from the suspect payment of his share of the proceeds.

“It was gathered that they were to share N6 million, as the business thrived for four months. However, the suspect allegedly started avoiding his partners, which made them believe that he might have craftily reinvested the proceeds without their knowledge.

“The deceased traced the suspect to the farm to find out what has been happening; and on the farm, misunderstanding arose between them, which allegedly resulted in the killing of Ani by the suspect. He buried him inside the bush.

“The deceased was said to have been reported missing by relations who could not immediately find out what happened.

“Following the suspicious ways the story appeared, Police Commissioner Mr. Sulaiman Balarabe ordered investigation. The suspect was nabbed by operatives in partnership with neighbourhood watch group members from the community where he was hiding,’’ he said.

Amaraizu said the suspect had been helping the operatives in their investigation in relation to how he allegedly killed his victim and quickly buried him inside the bush.

He said the suspect had, however, maintained in his confessionary statement that the money in question was not to the tune of N6 million but N300,000.