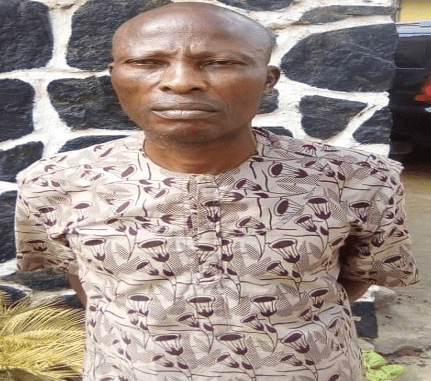 A shameless father who allegedly raped and impregnated his own teen daughter has been arrested in Ogun state.

The suspect, 52-year-old Emmanuel Ikhine was nabbed over the weekend at his 6 Iyaniwura st, Joju home in Sango Ota Ogun state.

It was learnt that a neighbour, Yemisi Ashade, took the 18-year-old victim to a police station to lodge a complaint after the teenager disclosed how her father had been allegedly raping her.

The victim alleged that Ikhine usually raped her whenever she was home alone, adding that he would threaten to deal with her if she disclosed it to anyone.

She alleged that he always targeted when her two brothers were away to rape her.

According to The Nation, when the victim could no longer bear the torture, she informed a neighbour, who took her to the Divisional Police Officer (DPO), Sango Ota, Godwin Idehai, a Chief Superintendent of Police (CSP).

Confirming the incident, spokesman Abimbola Oyeyemi, a Deputy Superintendent of Police (DSP), said the suspect had been arrested and he confessed to the crime.

“He made a confessional statement that he has been having carnal knowledge of the victim long before now.

“The victim was taken to the general hospital where it was confirmed that she is pregnant.

“Police Commissioner Bashir Makama has ordered the transfer of the suspect to the anti-human trafficking and child labour unit for further investigation and prosecution,” Oyeyemi said.