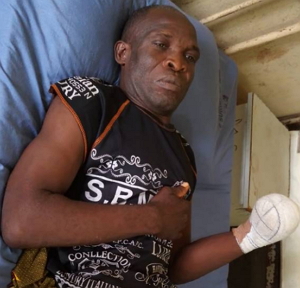 Mathias Odey, a 54-year-old farmer who lost his hand during a clash with Fulani herdsmen on the 5th of November 2017 in Ugaga, a village in Yala LGA of Cross river state.

Here is what the victim told Southern City News

“My children and I were plucking pepper from one of my farms. We usually do this together. After I finished with the pepper, I went to another section to harvest yam.

“I had barely harvested four tubers of yam when we saw some Fulani herdsmen entering our farm. Three of the herdsmen were with their cows, scattering the ridges. My son attempted to chase them, but one of the herdsmen brought out a cutlass and went after him.

“He hit my son twice but didn’t injure him. I went after him and suddenly, he turned towards me and tried to cut off my neck with the cutlass. I used my hand to defend myself and that was when it was chopped off.”

“When this incident happened, there were promises that the government would take care of my hospital bills and see to it that I get treated, but nothing of such has happened.

“I have been depending on the goodwill of family members. I have spent the last four months in and out of hospitals both in Calabar and Ogoja Local Government Area”.