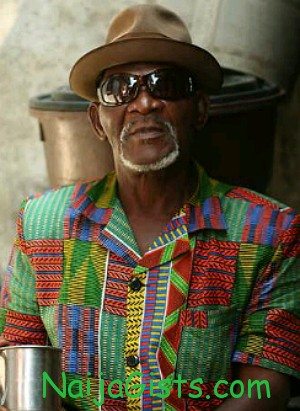 The talented Highlife musician said he has been rumoured dead up to six times now. He also spoke at length on his life history, his many wives, career amongst other issues.

Interview excerpt below:
How many times have you been rumoured dead?

About six times, I m not bothered by such because I’m used to it and that shows that I will live long.

At 82, you are very energetic, what is the secret?

It’s God’s making because He is compensating me for all the years I suffered. I have really suffered. I lost some children, including my younger wife who bore me three kids.

Is there any spiritual angle to it?

No, I’m a Muslim and God is my strength, the only medicine I know is malaria medicine or jedi herbs

So you don’t believe in supernatural powers?

There are, but all that has happened to me is natural, God has a way of doing things.

Was there any time you felt like telling God that enough was enough, that you have suffered enough?

One incident that baffled me was the death of my younger wife because she was neither sick nor showed any sign of ill health, before she died at about 1 a.m. that day. I did not believe that Risikat Olagunju nee Ogunbona was dead until the day she was to be buried. That was a trying moment for me.

How many wives do you have now?

I have kids from five women.

How many children do you have now?

Any plan to have more?

You said so before and you had the twins later?

It’s  the  work of God, so He can’t be questioned, but right now I’m okay with what I have.

At your age you are still active sexually, how do you do it?

Go and ask my victims, they will tell you how active I am in bed.

Do you use any enhancement drugs?

I only use herbs, I use lots of them.

Do you have any ailment at your age?

No. My only problem is backache. That’s all.

I have gained more despite the fact that I came to limelight at an old age. Because the first time I entered an aeroplane was when I was 76. That was when I travelled to Morocco, later Spain and back before embarking on a tour of Europe. I have been to London, Paris, Holland Germany, Belgium and New York .

You are happy that you travelled at such an old age?

It’s God’s work because if I had achieved something like this at a young age may be I would have been dead by now. I’m now free from witches and wizards so they cannot harm me anymore

You have trained someone  like Commander Ebenezer Obey, and you are like a father to King Sunny Ade, what is the relationship between you and them now?

They are my boys because I’m the root and without the root there will be no leaf or leaves. We have a cordial relationship.

Musically, looking back it seems that the popularity of juju music is on the decline. What is your impression about that?

The thing is, the younger ones are lazy, if not, how will hip-hop take over? Most of the younger ones can’t play any musical equipmement.            Hip-hop artistes and I was able to blend. I’m even better than some of them.

How many musical instruments can you play?

I can play the guitar, the accordion, conga, bongo.

Who taught you how to play all these instruments?

It was what I gained from being a street boy, because I always left the home and followed musicians on street parade and when I returned home my mum would beat the hell out of me. My father never caned me till he died but my mum was a disciplinarian, because she insisted I must go to school.

Which trade did you learn?

I learned sign writing and I worked with Railway Corporation for 25 years as a mechanical engineer under J.A .Allen. I’m also a tailor. But I no longer have those skills, except music.

Are you from a music family?

No I’m from a royal family of Olagunju in Ede, Osun State.

Will you encourage any of your children to go into music?

I won’t force any of them to play music because nobody showed me how to play music. I learned from the streets. I have one who is playing like Tunde Nightingale, but he is still in school. If any of my children is interested in singing, good for him or her.

Did you make money before hitting the limelight?

No. I did not make money in the past and when my instruments got burnt during the Unknown Soldier saga, I decided to go and work as a security guard at Teslim Balogun Stadium which was known as UAC stadium at that time. I worked there for some time before returning to music.