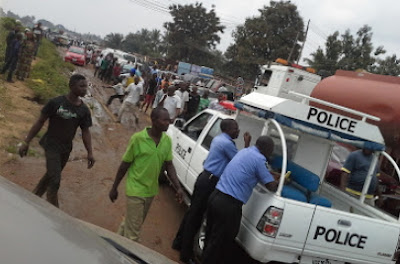 3 persons were reportedly feared dead on Monday afternoon at Biochem area along Ondo-Ore Ring Road near the main gate of Adeyemi College of Education, Ondo by an unmarked Toyota Camry car.

The accident was said to have occurred when the over-speeding car overtook two vehicles, facing an articulated vehicle.

It consequently lost control and rammed into a computer shop, and allegedly killed one and injuring two persons believed to be apprentices in the shop.

The three apprentices were believed to have been killed instantly and the development was said to have raised emotions.

This was said to have prompted enraged passers-by to set the reckless vehicle ablaze, before students arrived at the scene, while the driver of the car joined in rushing the victims to the hospital.

However, it was learnt that only one of those crushed was confirmed dead at the scene, while two others were rushed to the Trauma Centre along Laje Road in Ondo.

According to the Student Union President, Comrade Abidemi Zubair, none of the students of the College was involved in the accident.

However, many students trooped to the scene of the crash to assist the victims of the accident in getting to the hospital. [NAN]

Omotola Jalade Is The Breadwinner Of Her Family, Pilot Husband Captain Matthew Ekeinde Not As Rich As You Think
Toyota Hummer Bus Driver Dies In Fatal Crash At Ibafo Bus Stop On Lagos Ibadan Expressway