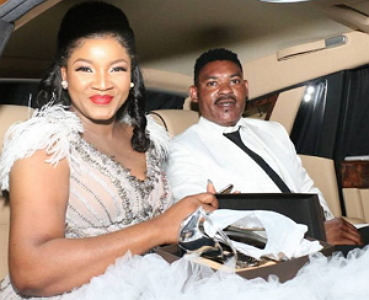 Though Nollywood actress Omotola Jalade is doing everything in her power to hype her man, we learnt  her Oga Pilot husband, Matthew Ekeinde is not as wealthy as his wife portrays him to be.

The indigene of Sabongida Ora in Edo state who spent five years  in Owerri where his father worked as a DPO later relocated to Lagos where he met Omotola years later.

The source said the son of an Igbo woman from Abo in Delta state has a bit of responsibility on his shoulder which we learnt might be preventing him to be the lavish  hubby most women wants but his hardworking wife is not complaining since she also has a heavy bank account.

Mr Matthew Ekeinde an experienced pilot who  has worked with Sosoliso, Pan African Airline, Arik Air, Bellview , Aero Contract and Air Nigeria in the past is not broke for wrong reasons.

The source said Mr Ekeinde is a big dreamer who has been dreaming to have a mini airport for a long time but since he invested his money in a 100 acres of land in Badagry few years ago, things have become really tough for him.

Captain Ekeinde who established The Aquatic Jungle Entertainment, a tourist center in Badagry years ago is still working to establish a 5-star hotel, zoo, aquariums and roller coasters.

All his big dreams which cost money we learnt has left him in a position where his wife is the one working round the clock to provide for the family since she is fully supportive of her husband big dream which once accomplished will make him one of the wealthiest man in the country.