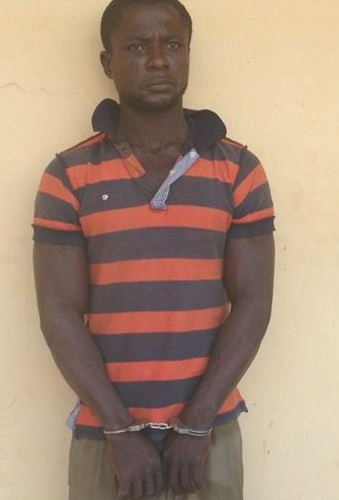 The deceased identified as Bernadette Anyim was one of 3 wives of Friday’s dad, Ogbonna Anyim while the suspect a secondary school drop out is the son of Ogbonna’s 1st wife.

It was gathered that on the fateful day, Friday was engaged in a heated quarrel with one of his sisters, named Abigail, over his intention to sell a water tank that belonged to the family.

Friday wanted to use the proceeds of the planned transaction to purchase a motorcycle, which he intended to use to operate as a commercial motorcyclist.

The matter was said to have taken an ugly turn when Friday suddenly picked up an axe, and attempted to use the weapon on his sister.

It was learnt that at the same moment, his stepmother, Bernadette, moved to separate Friday and Abigail.

However, the axe, which Friday swung at his sister, landed on Bernadette’s neck.

Friday immediately dropped the axe and took to his heels.

Ogbonna said he received news of the unfortunate development in his household while he was at a village meeting.

He said he rushed home as Bernadette was being taken to a hospital, where she was confirmed dead.

He said. “I am in pains and I don’t know how to approach this, but I believe that the law will take its course.”

Friday, who was later arrested by the police, expressed regrets over the incident.

He blamed his actions on hemp.

He said, “I wanted to hit my elder sister, Abigail, with the axe when it mistakenly landed on my stepmother. I acted in anger; I plead for forgiveness. I also advise youths to abstain from taking hemp and other dangerous drugs and avoid anything that can lead them to kill fellow human beings.”