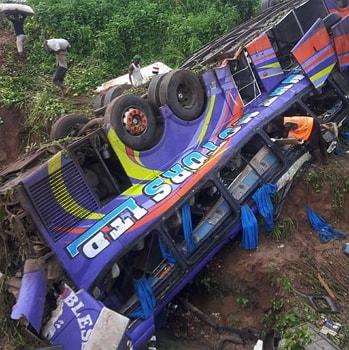 At least 4 men died in a motor accident in the late hours of Monday on the Omu-Aran-Oke-Onigbin highway in Kwara State, the News Agency of Nigeria (NAN) reports.

An eyewitness said the passenger bus, which was fully loaded with oranges, had a head-on collision with the truck, which was believed to be on top speed at about 9pm, resulting in the death of its driver and passenger.

According to NAN, the driver of the truck and his motor boy were also killed.

“The truck dragged the bus with its passengers for a few metres, before pushing it into a ditch,” said the eyewitness, who preferred anonymity.

He said it was during the rescue efforts, which continued on Tuesday morning, that the body of the bus driver was removed and deposited at the mortuary, alongside the other three victims.

Adetunji, who attributed the accident to over speeding and dangerous driving, cautioned motorists to always obey traffic rules and regulations, to stay alive.