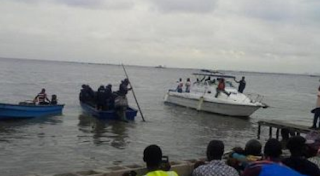 A person died when a conveying over 20 passengers on Tuesday capsized on Lagos waterways with one person dead and 19 others injured.

An emergency source revealed that about 20 passenger were on the boat when it capsized.

The boat was said to have capsized on the 3rd Mainland Bridge axis of the waterways.

Those rescued had been rushed to the Ebute-Ero Jetty while the search for the remaining victims was still ongoing.

The passenger who lost his life in the mishap was said to have sunk with the carcass of the boat while investigations still ongoing to unravel the cause of the accident.

The Lagos State Government had last Wednesday said that it has stepped up efforts to clampdown on illegal jetty and boat operators in the State in a renewed effort to stem the tide of boat mishaps often caused by illegal operations on the inland waterways.

The LASWA MD, Emmanuel said that strict enforcement which would be meticulously carried out across the State, adding that the Government would stop at nothing to ensure that operators adhere to the safety standards.

“Being a developing sector, one of the things that LASWA has had to do is to be very strict on enforcement. Enforcement is going to be an ongoing thing because you would constantly have those people who are going to default. In terms of clamping down on jetties that are substandard is something that LASWA has been looking to go round the state to clamp down on illegal jetties,” he had said.