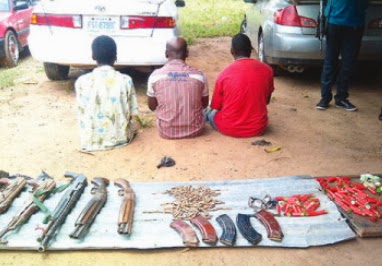 A man has been arrested in Asaba, Delta State along with his 3 sons for armed robbery.

Also arrested were three other robbery suspects, who were dislodged from an uncompleted building allegedly provided by the 65-year-old father of three.

State Police Public Relations Officer, PPRO, Celestina Kalu, who paraded the suspects at the Police ‘B’ Division, Asaba, weekend, said: “We are taking the fight to their (criminal) hideouts, so there is no hiding place for criminal elements. Wherever they are we will smoke them out.”

She said the suspects (names withheld) were arrested following a distress call by a resident at Oduke, outskirts of Asaba, who was attacked at night and N72,000 cash stolen from him.

“Following the distress call, a police team was drafted to the area from B Division Asaba and on sighting the police, the robbers fired at them and there was a gun battle in which two of the robbers were brought down while some of them escaped,” the PPRO said.

She added that the father of the suspected three robbers was habouring the criminal gang in his uncompleted building .

Meantime, a boy has been arrested at Ogwashi-Uku, in Delta State for allegedly stabbing another boy to death following a minor quarrel over a lover.

Report said the incident took place at Ogbe-Ofu area of Ogwashi-Uku where the suspect was said to have met the victim in the woman’s house and a fight ensued.