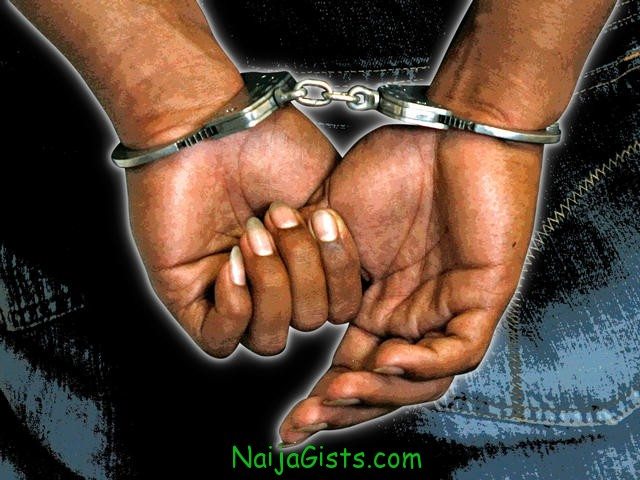 Residents of Alagbado area of Lagos state were is shock and disbelieve following the arrest of man named Abraham Olaniyan who sold his day-old baby to an Anambra State Business woman for N350,000. naijagists.com

Shortly before his arrest, sympathizers and close relatives of the Olaniyans had thronged their apartment to console them on the death of their baby.

Further report stated that the suspect’s wife , Mrs Nkechi Olaniyan was pregnant for the fifth child. But the family, as gathered, had been going through financial difficulty which led to the suspect’s inability to care for his immediate family. On the day of delivery, the suspect, a bricklayer, reportedly took his wife to a private hospital around Alagbado where she was delivered of a baby boy.

Crime Alert learnt that trouble started Mrs. Olaniyan regained consciousness, an hour after the delivery, and she was informed that her baby had died. She reportedly demanded severally to see the remains of her baby, only to be told that he had been buried already.

Suspecting a foul play, she reportedly contacted the police and expressed fears that the purported story of her dead child was shrouded in unfathomable circumstance. The Police immediately arrested the husband, a development that initially sparked up reactions from different quarters.

But preliminary investigation, according to Police sources, revealed that the 26-year-old father allegedly connived with some medical staff to sell the baby, following his inability to cater for him and his siblings. According to the sources,“ we arrested the man based on his wife’s disclosure that he had one time threatened to sell one of their children.

She said when she was pregnant, her husband asked her to terminate the pregnancy because of their financial state but claimed she refused. So, after she regained consciousness and was told the baby had died, she insisted on seeing the corpse and when they did not, she concluded her husband could have made do his treat.

“ At first , her husband denied . But he later confessed that he sold the baby for N350,000 to a woman in Anambra State who had been been looking for the fruit of the womb for fifteen years. His confessional statement led to the arrest of the doctor of the hospital and two nurses, who during interrogation, told us the man gave them his consent and that the woman was aware of the whole plan”

Investigation, as gathered, further revealed that the woman was anesthetized immediately she put to bed, apparently to prevent her from knowing when the illicit transaction would take place.

On how the business woman was arrested in far away Anambra, police sources said, “ she was called on the phone by Abraham who said he wanted to see her. A place was booked for the meeting and when she showed up, we arrested her.”

Meanwhile , back in Onitsha , the apartment of the business woman simply identified as Rachael was agog with celebration. One of her relatives was already in her house to help her massage her body and also bath the child. The joy between her and her husband over the arrival of their baby knew no bounds , owing to the several years of waiting for a child of their own. It could however not be ascertained whether she revealed the source of the baby’s arrival to her husband.