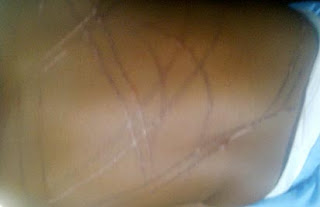 What would push a man into an action that will inflict severe pain or even endanger the life of his own child?  Which sensible or a normal father will readily take up a whip to flog a child that is only 14 months old? A child that can barely talk? These are some of the questions now begging for answers following the petition of a housewife who brought her husband before the Bauchi Shariah Commission.

Vanguard Metro, VM, gathered that Huwaila Abdulahi, 22, who has been separated from her husband, is asking the Commission to investigate and unravel the mystery behind the strange marks all over the back of her 14 months old daughter. Although the estranged housewife is not seeking for a divorce, she is demanding for justice for her innocent baby as the 14 marks were not there when the father sent one Ibrahim to bring the little girl to spend some time with him.

The man, identified as Ibrahim Haladu, is being accused of carrying out a ritual on his child. He has been invited by the Commission to explain the strange marks on his daughter’s back. But he is insisting  that he only flogged his daughter with the cord of his handset charger because she was disturbing him from watching his favourite satellite television programme. He has also denied that the marks on his daughter’s back were for ritual purposes.

In spite of his statement, many people who saw the strange marks on the child were not convinced of his testimony as they  believed they were carefully incised.

In his account of the incident, Ibrahim said: “I was watching an Arab channel but she would not let me be with her cries. I was enjoying the programme, but her cries kept distracting me. I was provoked so I brought out my charger phone wire and flogged her. My first wife Aisha who heard her cries came out and was shouting at me to stop. She was even angry and rebuked me for beating her like that. I regret my action.

The marks on my daughter’s body is not  for ritual purposes as wrongly insinuated by some people. I can never use my child for ritual. It is unfortunate that my wife had to drag me to the Sharia Commission because she has a grouse against me. We have been having problems with her, but that is between us. Why should I go to the extent of using my child for ritual? I only beat her as a father. I don’t belong to any cult or secret society”.

Some residents of the Tirwun, a suburb of Bauchi, where Ibrahim allegedly carried out the beating  of his baby were left in shock on seeing Sahura with the 14 strange marks on her back. They called for thorough investigation into the case so as to unravel the motive behind his action.

But his estranged wife Huwaila, the mother of the little girl, is still sceptical over her husband’s explanations. She is pleading with the commission to thoroughly investigate the matter. VM learnt that the couple had not been living  together due to some marital problems.

But he occasionally comes to take the baby to spend some time with him in his new place and bring her back. One day he sent one Ibrahim to come and bring Sahura; this was around one in the afternoon. But when they brought back my daughter, I noticed something unusual about her because she kept crying and I wondered what was wrong with her.

When I checked her body, I saw some strange marks all over her back”. Huwaila said she quickly rushed to the Bauchi State Shari’ah Commission to lodge a complaint after she confronted her husband who claimed he only flogged Sahura because she was disturbing him with her cries.

The permanent Commissioner II of the State Shari’ah Commission, Jibril Hassan, confirmed that Huwaila lodged a complaint prompting the commission to summon the husband. Hassan added  that the commission was investigating the issue and would charge the father of the girl to court at the appropriate time. He also said that if found guilty of the accusations leveled against him, the accused would be charged to court.