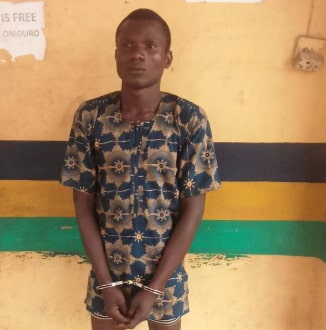 A father from hell has been arrested and placed behind bars in Abeokuta Ogun state for killing his biological daughter.

27 year old Andrew Koku, a resident of Were Village in Abeokuta reportedly carried out the evil act on the 24th of December 2018 at another village called Ayedere near Obada Oko, Abeokuta Ogun state.

According to police investigation, Koku beheaded his 6-month-old baby with a cutlass around 6pm.

In his confession, he said he decided to get rid of the innocent baby because his wife cheated on him with her ex lover.

He added that his adulterous wife angered him and he believed that getting rid of the bond between him and the woman with put a final end to the marriage.

He is currently cooling off behind bars.

He will appear in court on the 23rd of February 2019 for hearing.