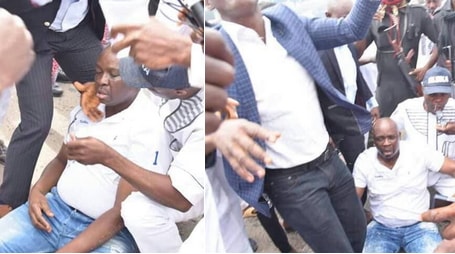 Barrister Morakinyo Ogele, avHuman rights lawyer, has said Governor Ayo Fayose was treating the people of Ekiti State to a “huge dose of comedy” over the alleged teargassing incident on Wednesday.

Ogele said the entire script was developed, produced written and acted by Fayose to blackmail the Federal Government, the Nigeria Police and the Inspector General of Police.

The National Coordinator of Ekiti Redemption Group who spoke in a telephone chat with our reporter on Wednesday described Fayose as a master in playacting and simulation to deceive members of the public.

He said Fayose deliberately arranged the “comedy show” to be broadcast live on two prominent television stations wondering why the governor emerged from the hospital to address the crowd when the live broadcast was on.

Ogele urged Ekiti people to expect more drama from the governor before and after election.

“What happened yesterday was a comedy produced by Fayose Theatre Group. I think there is tension in respect of the election to be held on 14th July.

“He just produced this comedy to water down the tension in Ekiti State so that the people could laugh. At this moment, people have forgotten about the election in order to watch him on stage.

“In 2006, he (Fayose) drove to the Third Mainland Bridge in Lagos, shot his vehicle and ran to the Press Centre in Lagos that he was being pursued by hired assassins.

“We thank God that we did not pay a kobo to watch this drama, we expect him to produce more play before the forthcoming election.

“We are expecting him on 14th of July to produce a play so that people will go to polling centres well entertained ahead of the time they will exercise their franchise.”