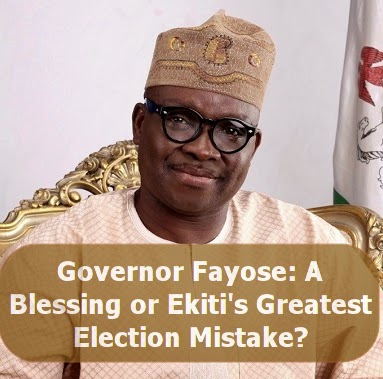 The newly elected Governor of Ekiti State, Ayo Fayose is close to being called a dictator after shutting down 4 filing stations in his first week in office.

In a statement signed by the speaker, he accused the governor of trying to use political intimidation to force him to join PDP.

“I got all necessary approvals for the project. A lawmaker, Joseph Dele Olugbemi, told me two days after the governor’s inauguration that he (the governor) had made up his mind to close my filling station over my refusal to join the PDP.

“I had told the governor that in the interest of Ekiti people, the House of Assembly would work with him to serve the people.

“I called the governor to confirm what I was told. He denied it, swearing that he would not pursue any victimisation agenda against his opponents.

“But only yesterday the governor ordered the closure of the filling station, citing environmental factor.”

He claimed that he fulfilled all necessary environmental laws in the location of the filling station and got approval.

Omirin has said intimidation and coercion by the PDP-led government would not force him to abandon the All Progressives Congress (APC).

He said no level of harassment, financial inducement or persecution would make him betray the people and the APC.

We hope Ekiti people will not end up regretting ever electing this Jonathan pikin.