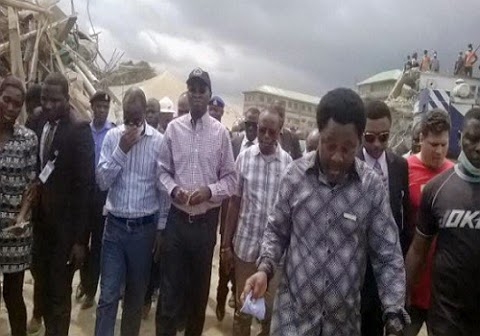 South African government has urged Nigeria to expedite the release of the remains of 84 South Africans killed at Synagogue Church Of All Nations, SCOAN in Ikotun Lagos on the 12th of September, 2014.

LASG started an inquest on all the 116 victims of the collapsed guest house last month and there is still no news on when the bodies will be returned home, a South African government spokesperson was quoted as saying yesterday.

“We still don’t know. Even as we speak now the laboratory (in Lagos) has not given us an update,”

The Chief Medical Director of the Lagos State University Teaching Hospital (LASUTH), Prof. Olawale Oke, said DNA samples for identification of the 116 victims had been concluded.

He said the hospital sent the specimens to South Africa and was awaiting the results of the analyses.

Oke said: “You are aware that an inquest is on now; so, there is limit to what I can tell you about this.

“I can tell you that the Lagos State University Teaching Hospital has collected the samples of family members of victims of the collapsed building for DNA testing at a Pathology and Forensic Medicine.

“This is to ensure that all victims of the collapsed building are properly identified and delivered to their various families for burial rites.

“The DNA is being done free.

“Because 80 per cent of the victims were South Africans, for us to take a specimen from the relations, you have to bring at least two relatives from South Africa to Nigeria.

“So, the state decided to select a laboratory in South Africa that is equally competent to do the DNA so that 80 per cent of the relations who are South Africans could have their specimens taken.

“The specimens of their Nigerian victims have been flown to South Africa.

“The post-mortem for all of them have been conducted, the dental recognition process done, X-rays have been done where necessary; so, we are just waiting for the results to be out.”

“This is disheartening and this clearly shows a lack of ubuntu. One can imagine the agony of the families who have been waiting for several weeks for their loved ones to be brought back home,” the party’s national chairperson Blessed Gwala said.

“The Nigerian government must respond in the spirit of ubuntu by speeding up the process of the DNA testing and the bodies must be sent back home without any further delay.”

Gwala said families in South Africa had to postpone funerals because they did not have the bodies.

“Whenever there is death there are rituals and cultural norms that need to be observed, but these families are being denied this.”