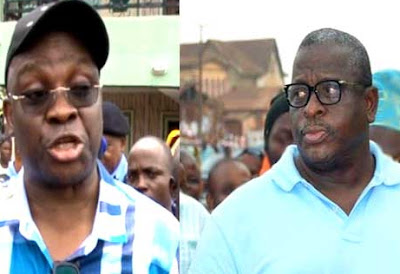 Kashamu also described Fayose as the number one destroyer of the People’s Democratic Party (PDP).

The lawmaker, who reacted to Fayose’s presidential campaign launch in Abuja, noted that the governor was only showing Nigerians how unreliable he is.

He described as a huge joke Fayose’s presidential ambition insisting that “I tell you Fayose is not bidding for any presidential position come 2019.”

“Lovers of our great party and politically minded Nigerians generally, should by this action of Fayose see him as the number one destroyer of the party and the most cantankerous politician in the polity who can at any time abuse anybody and go against agreed plans at any time.

“I believe that am not the only one disturbed by Fayose’s agbero brand of politics but all political stakeholders in the land including those who followed him from Ekiti to grace his campaign launch because everybody knows that he is going nowhere come 2019 but just exercising his right in a funny way as a joker.”

Tonto Dikeh: Azuka Ogujiuba Was Paid To Destroy Me, I Had Miscarriages After 7 Violent Attacks
Farmer Dies After Drinking Agbo Jedi Herbal Drug At A Joint In Joba Ondo State