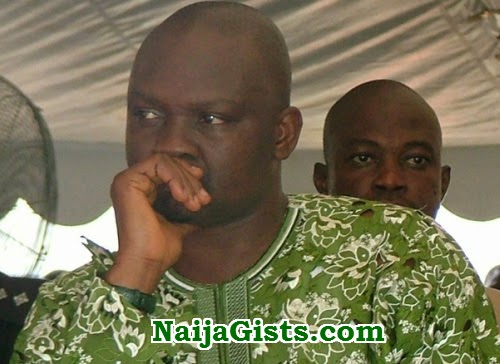 June 4, 2015 – Fayose Claims Illegal Victory On APC Lawmakers Trying To Impeach Him After Hiring Thugs To Block Lawmakers From Fulfilling Their Duty

Ekiti state Governor Ayodele Fayose who has employed  the services of hoodlums and thugs in Ekiti state to block 19 APC lawmakers from entering the House of Assembly has started claiming illegal victory over them.

In the past 2 months, Fayose has disallowed the APC lawmakers from fulfilling their duties at the House of Assembly complex. The only lawmakers working there in the past 8 weeks were PDP members.

Well as it is, he has started claiming victory. He claimed that the lawmakers have no legal power to impeach him any more.

Here is a statement released by Fayose’s spokesperson today;

“The last few months have been traumatic, especially this week. I was not given room for concentration, but I had left the battle for God to fight. I told those planning to impeach me that they will succeed‎ if they can impeach God.
“I did not bring myself back to power; my coming back after eight years was divine. I defeated the APC totally in all the elections, still they did not want to concede victory easily until when the Ekiti people rose to defend that June 21 mandate.I will now squarely face the business of governance.”

“The governor called on the people to gather at Ijigbo junction tomorrow ( Friday) from where he would lead them on victory walk to the state House of Assembly for the inauguration of the new House of Assembly members,”.

This “victory” comes after Fayose employed thugs and encouraged PDP supporters to block the roads of Ekiti and House of Assembly so that the lawmakers could not fulfill their duty.

The situation was illegal and continued without any intervention from law enforcement.