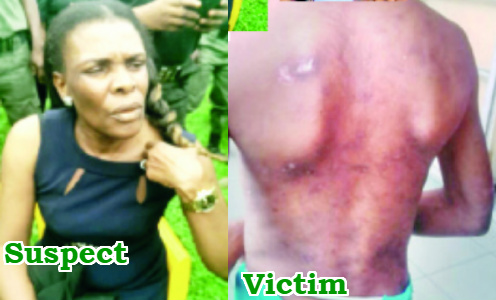 Out of all the children in Nigeria, on this very day that the country is marking her 57th Independence anniversary, nine-year-old Bright Maxson is probably the happiest, and jumping with excitement.

For seven years, starting when she was just two years old, the young girl was allegedly subjected to unspeakable abuse in the hands of 43-year-old Elizabeth Agboje, a female Human Rights lawyer practicing in Port Harcourt, Rivers State.

Policemen, who generally have a stoic attitude, having seen various forms of crimes, were still filled with revulsion upon seeing the shocking evidence of the degrading treatment she meted out to the nine-year-old.

Perhaps for the first time in her life, Maxson is experiencing peace and care at the Police clinic, where she is undergoing medical treatment, following her rescue by policemen attached to the Human Rights Department of the Rivers State Police Command, Port Harcourt, the state capital. 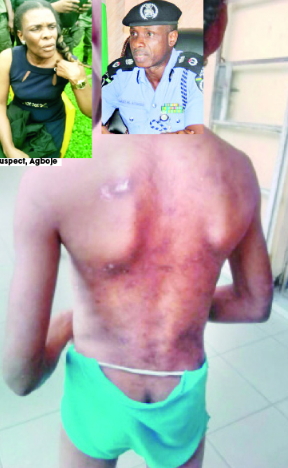 The Commissioner of Police, Mr. Ahmed Zaki told Sunday Sun that Maxson’s long walk to freedom began when her class teacher reported the heart-rending situation of the girl to the Rivers State Ministry of Social Welfare on September 18, 2017. The ministry promptly alerted the police. Zaki said that the head of the department, DSP Emmanuel Ukwanya and members of his team then moved to arrest the suspect. The victim was then taken to the police clinic.

Sunday Sun gathered that Maxson, who is in primary four has had an epileptic schooling experience as the suspect was alleged to have consistently starved her and would never pay her school fees. Maxson did not have a school bag or books, which are two basic essential items her mates did not lack. Rather, what she got in abundance was heartless flogging. 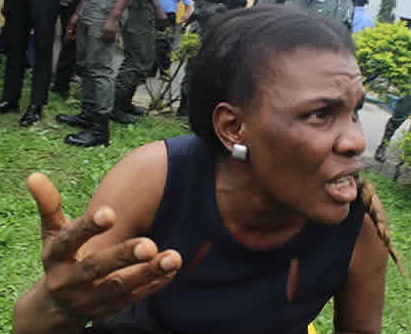 It was further gathered that the suspect’s cousin was said to have handed over the victim to her. Recounting the girls pathetic story, her class teacher, Mrs. Dakoru George said: “Little Bright Maxson does not have books and a school bag. Several times I sent messages asking her parents to visit the school to talk with us, but nobody showed up. She was always the last child to write the examination in the school due to non-payment of examination fee. At a point I had to report the case to the headmistress of the school.

“I could no longer bear it when I saw little Bright come to school one day with bruises. I quickly alerted the headmistress of the school and she informed the Ministry of Social Welfare. The ministry immediately alerted the Rivers State Police Command. The government must do justice in this case. Little Bright Maxson has been in bondage since she was two years old.”

In a brief chat with Sunday Sun at the police headquarters, Maxson told Sunday Sun her story: “My mummy (referring to the suspect) has been treating me badly anytime I made any mistake. She would flog me and deny me of food.

I go late to school. Whenever I told her to give me money she would refuse. I didn’t know who I could tell my problem until when my class teacher saw bruises on me and asked me who did it. I told her it was my mummy that did it to me.”

Agboje who spoke in her defence said: “I flogged Bright because she stole my money and other items. I took her to the church and they told me that she was a witch and needed deliverance. We started the process. Her mother gave her to me when she was two years old. She is my cousin.”

Agboje was later arraigned in court by the Human Rights Department of the Rivers State Police Command, before the Magistrate Court 5, presided over by Chief Magistrate Andrew Jaja on a one-count charge of allegedly inflicting several bodily injuries on the minor, and thereby committed an offence punishable under section II subsection (1) (a) (b) (c) and (d) of the Child Right Law No. 10, 2009.

The presiding magistrate ordered that the accused be remanded in police custody and adjourned the case to September 26, pending hearing on her bail application. When the case was resumed on the adjourned date, Agboje was granted bail and the case adjourned again to October 10.