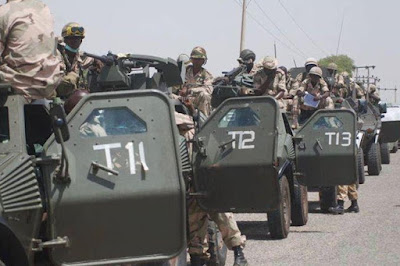 The Army today said it had killed one Boko Haram member after repelling an attack by the insurgents at Bocos village in Bama Local Government Area, Borno State.

Samuel explained that troops ambushed a group of the insurgents while trying to cross Banki Junction along Bama road on Friday.

He said that the troops killed one insurgent and many others escaped with gun shots, adding that a number of items including foodstuff were recovered from them.

Samuel disclosed that the troops also repelled another attack by the insurgents at a security outpost in Bama general area.

He added that one police officer and a female displaced person were killed in the attack.

“The troops sprang on the unsuspecting terrorists and neutralized one of them while several others escaped with gun shots wounds.

“On the same day at about 7: 00 p.m. troops of 202 Battalion of 21 Brigade successfully repelled insurgents attack on an outpost within Bama general area.

“Unfortunately a police personnel was killed in action while a female Internally Displaced Person (IDP) was hit by a stray bullet,” Samuel said.

According to him, the Commander of 21 Brigade on Saturday visited the scenes of the attack, attended the burial of the deceased IDP and commiserated with the IDP community.