Police in Ogun State at the weekend arrested three men suspected to be members of Eiye cult.

Olagboye Abidemi, 32, Olasemojo Michael, 28, and Wasiu Waheed, 23, were nabbed at Ogijo by a team of policemen led by the Divisional Officer (DPO) Muhammed Baba, a Chief Superintendent (CSP). 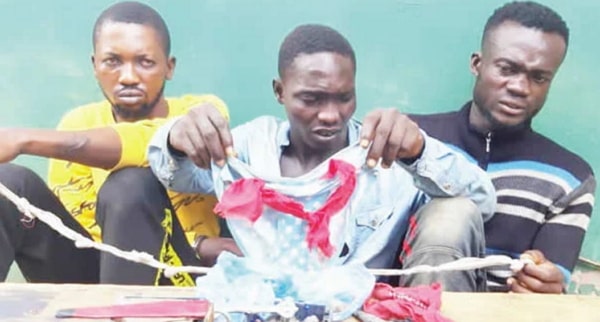 The suspects were said to have been apprehended during a raid of an initiation ground where detectives recovered a jack knife, blood-stained silver knife, a female pant tied with charms, among others.

Spokesman Abimbola Oyeyemi, a Deputy Superintendent of Police (DSP), said the raid was in continuation of the command’s war against cultism and other crimes.

“Police Commissioner Bashir Makama has ordered the transfer of the suspects to the Anti-Kidnapping/Cultism Section of the State Criminal Investigation and Intelligence Department (SCIID) for discreet investigation. He warned that the state will no longer be conducive for any violent group, as the command will take the battle to their doorsteps” said Oyeyemi.