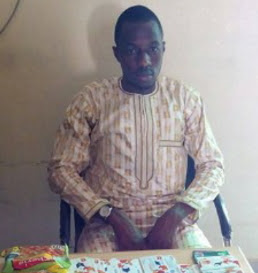 November 24, 2016 – Confusion As Policewoman Faints As Court Jailed Son For Stealing 3 Cartons Of Noodles In Abuja

A Magistrates’ Court sitting at Karu in the Federal Capital Territory (FCT), Abuja, yesterday sentenced a 20-year-old boy, Emmanuel Igwe, to one month imprisonment without any option of fine for stealing three cartons of noodles.

There was, however, a mild drama when Igwe’s mother, who is a policewoman, collapsed inside courtroom when the convict was jailed.

The prosecutor, Niang Domshak, told the court that the complainant, Kingsley Anike, reported the matter to Karu Police Station on November 18 and that following the report, the police swung into action and arrested the convict who lives at Jikwoyi Phase 2, Abuja. Domshak informed the court that the complainant accused the convict of stealing the three cartons of noodles from his shop at Karu market.

According to the prosecutor, the convict’s action contravenes sections 348, 287 and 306 of the Penal Code Laws. Igwe, who showed signs of remorse in the dock, also created a humorous atmosphere in court when he pleaded guilty to the charge. The convict begged the judge for mercy, saying that he was forced into the crime by hunger.

“Please ma, I stole the noodles because of hunger, I would not it again, I will change ma.” The defence counsel, Mahmud, also pleaded with the court to tamper justice with mercy, because his client was a first time offender.

The plea was, however, not considered as the magistrate, Mariam Bukola, sentenced him to one month imprisonment. The pronouncement, however, threw the court into commotion, when his mother collapsed in courtroom.