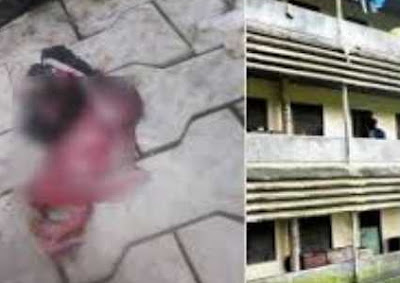 Exactly 7 days ago, the resident hall of female students of the Federal University of Oye Ekiti in Ekiti was in chaos following the discovery of a freshly aborted baby said to be 6-month-old.

The foetus dripping blood was kept in a black polythene bag and dumped near the refuse incinerator with the hope that the cleaners will dispose off the baby.

However, the cleaners raised alarm and reported the matter to the school porters who in turn informed the institution authority.

The porters later traced the blood marks on ground until the mother of the baby was found bleeding in a room.

The lady identified as Izuka, 100-level student was immediately rushed to the institution’s clinic for medical attention as her condition was bad.

A source at the institution said she has been suspended temporarily to take care of herself as she claims she wasn’t aware of the pregnancy.