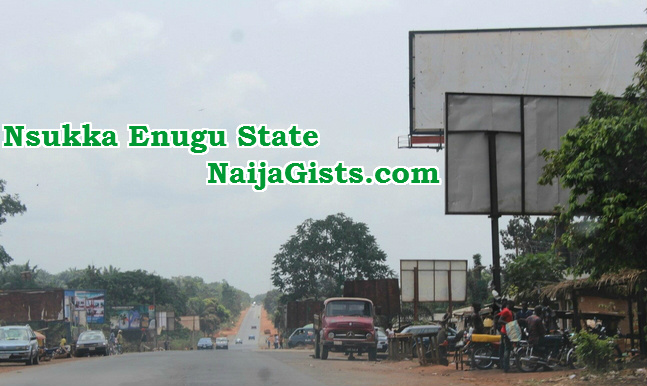 The peace of the university town of Nsukka was shattered on Monday as a middle-aged secondary school teacher was shot dead by unknown gunmen.

Daily Sun source said that “the late Mrs. Ugwu was coming back from where she went to see some family friends when the gunmen numbering about three, who had been trailing her,
double-crossed her at the junction. Thinking that the hoodlums were trapped by the potholes at the junction, the deceased slowed down, sounded her horn and flashed her head for them to shift a little out of the road.

“By that time, the deceased was already shouting at them for blocking her way. One of the gunmen disembarked from their bike, came to her side and pointed the gun at her. At that time, one of her husband’s relations who was with her in the car ran out and made straight to their house, which is about 100 metres away, to report to the husband about what was going on.

The husband on hearing that his wife was being threatened by unknown persons, ran out, wielding machete and shouting on top of his voice that he was going to deal with anybody who hurt his wife.”

Our source added that when the husband got to where his wife’s car was parked, he discovered that she had been shot in the head before her attackers zoomed off on a motorbike. He then rushed the deceased to the hospital where she was pronounced dead.

“When we checked her car, her handsets, money and other valuables inside the car were still intact. None of them were touched. They were just sent to kill her and nothing more. We even heard from those near the scene during the incident that she was begging them to take her phone and other valuables but spare her life but they refused. Rather, they shot her on the head and her brain scattered on the windscreen of her car when we went there,” one of her relations who pleaded anonymity explained.

Daily Sun investigation revealed that for over six months now, the gunmen had been trailing the deceased, a situation that made her always go out with one of her relations.

When our reporter visited the Divisional Police Officer, Nsukka urban Headquarters, Mr. James Nwokolo for confirmation, he was said to have gone to Enugu on official duty. But a senior police officer, who pleaded anonymity confirmed the incident.