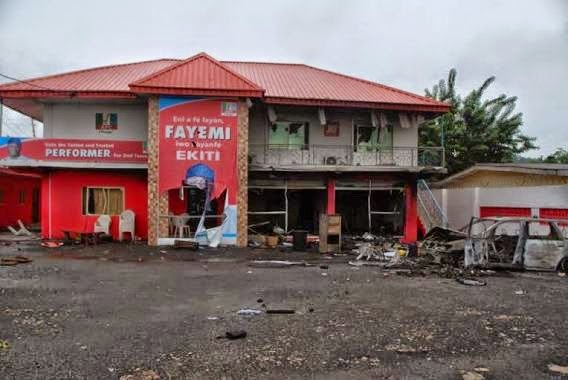 Excerpt from a letter Human Rights lawyer, Falana wrote to IGP over the state of unrest in Ekiti.

Ekiti people have returned to the wilderness – Falana

This is a reminder of the Idi Amin era in Uganda when judges were killed while discharging judicial functions,” .

“In my reaction to the outcome of the Ekiti state governorship election held on June 21, 2014 , I expressed the view that the Ekiti people had gone back to Egypt. The mayhem unleashed on a high court judge, lawyers and litigants in the precinct of the Ekiti State High Court sitting at Ado Ekiti on Monday, September, 23, 2014 by a gang of hired hoodlums has confirmed that the Ekiti people have fully returned to the wilderness.

“As the thugs were not brought to book they regrouped this morning and launched another attack on the High Court. In the process Justice Isaac Adeyeye was beaten up while the car of Mr. Rotimi Akeredolu, a former President of the Nigerian Bar Association was destroyed. Other judges and lawyers ran for dear lives.

“Thus, by desecrating the temple of Justice with the connivance of the Police the armed lumpen elements left no one in doubt that they have the full backing of the ruling party in executing the premeditated onslaught on the judiciary.

So far, those who perpetrated the barbaric attack and their sponsors have admitted their ignoble role through public statements issued by them. The Ekiti state governor-elect, Mr. Ayo Fayose has justified the shameful attack on the rule of law in Ekiti State by saying that his election cannot be challenged in court. This is a reminder of the Idi Amin era in Uganda when judges were killed while discharging judicial functions. Mr. Fayose and his thugs should not be allowed to kill judges and lawyers before calling him to order.

“Since the Ekiti State police command is completely compromised the Acting Inspector-General of Police, Mr. Suleiman Abbah is called upon to ensure that all the assailants are arrested and prosecuted without any delay

“Any attempt to cover up the brazen contempt of court should be resisted by the Attorney-General of Ekiti State, Mr. Wale Fapounda who should take decisive measures to bring the criminals to book. Let no one politicize the criminality of those who are bent on replacing the rule of law with rule of force in Ekiti State. The Federal Government ought to distance itself from the shameless display of brute force by an in-coming governor Ekiti state.

“In view of the duty imposed on the Nigerian Bar Association to defend the rule of law and protect judges and lawyers the leadership of the Bar in Ekiti State and at the national level should mount pressure on the Police Authorities to fish out those who beat up a judge, chased judges and lawyers out of the Ekiti State High Court.

“Even under the defunct military junta judges were never subjected to physical assault over their decisions. Hence, in Garba v Federal Civil Service Commision (1998) 1 NWLR (PT 70) 449 it was held by the Supreme Court (per Eso J.S.C.) that:

“The military in coming to power is usually faced with the question as to whether to establish a rule of law or rule of force. While the latter could be justifiable a rule of terror, once the path of law is chosen the mighty arm of government, the militia which is an embodiment of legislature and executive must in humility bow to the rule of law thus permitted to exist.

“The rule of law knows no fear, it is never cowed down, it can only be silenced. But once it is not silenced by the only arm that can silence it, it must be accepted in full confidence to be able to justify its existence,”