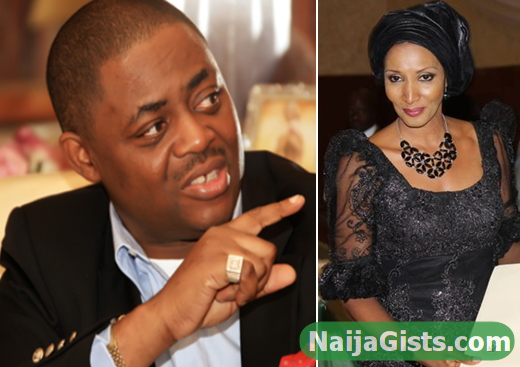 The ongoing romance fight between ex-Nigeria’s minister of aviation Chief Femi Fani Kayode and the widow of late Igbo leader, Bianca Ojukwu is getting serious.

Few days after Fani Kayode withdraws his romance comment, the now Nigeria’s ambassador to Spain has started a new line of fight.

Bianca claims she is not satisfied with Femi’s romance comment withdrawal and this has sparked a serious anger in Fani Kayode’s camp.

Yesterday, FFK claims he is ready and able to fight Bianca legally and that she should get her attorney ready to confront him.

He also took to his Facebook page few hours ago calling Bianca Ojukwu a Jezebel.

He vows to fight Bianca and her supporters spiritually with the backing of the Lion of the Tribe of Judah, Jesus Christ.

Read his Facebook message titled An Ode to Jezebel below;

AN ODE TO JEZEBEL

The Holy Bible says, ”who is he that sayeth a thing and it cometh to  pass when the Lord God of Hosts has commanded it not?” It says, ”who  can lay a charge before God’s elect? It is Christ that justifies”. It  says ”who can separate us from the love of the Lord” and that ”in all  these things we are more than conquerors”. It says, ”the Lord is my  light and my salvation, whom shall I  fear? The Lord is the stronghold of my life, of whom shall I be afraid?  When evildoers assail me uttering slanders against me, my adversaries  and foes, they shall stumble and fall”. My God is awesome. He that is  known as the Ancient of Days never sleeps and never fails. The battle  belongs to Him.

Sit back and watch this show unfold for it was  ordained before the oracles of time and there is a hidden and divine  purpose for it. I never wanted it to be like this. I never asked for a  fight and I did all I could to avoid it. I may have been indiscreet in  my attempt to make a simple point but I am not a liar and neither will  anyone brand me as one just to please their oriental constituency. I was  taught to always avoid rancour, discord, war and conflict and to always  seek the path of peace, especially when dealing with ladies. But when  war is forced upon me and my integritry is put at stake we I will fight  with everything that I have got to protect it and to defend myself. This  is because truth is like a pearl that must never be allowed to be  buried or shattered and I am a servant of truth.

By the time  all this is over we will know who the liar is and whose God rules in the  affairs of men. Meanwhile the one that is encouraging my adversary to  take this ugly road to perdition and that is using her to try and  discredit and silence me shall fail. This, by the grace and power of the  God whose I am and the God whom I serve, shall surely come to pass.

In the meantime use all the power and influence that you have and use  all your Jezebellian wiles. These are nothing before the Living God and  the Lord shall meet you there. You have woken up a lion that never backs  down and that has never lost a war- He is the Lion of the Tribe of  Judah and He is with me. Unless I have told a lie about what transpired  between us in the distant past, may God cause you and those that are  encouraging you on this destructive course, to suffer the consequences  of your lies and sheer wickedness. This because you have chosen to repay  my good with evil. 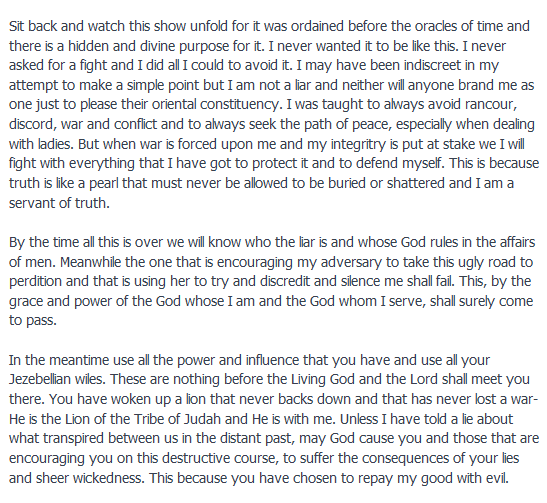 I never thought FFK is a Christian… All the same both of them are adult and they should be more matured than this.

When is this romance fight going to settle?

If they’re both in love with each other, why can’t they go ahead as adults.

Bianca Ojukwu is a widow while Femi Fani Kayode is still married but sources claim they almost got married in the 80s.

The daughter of former Oyo Governor Kemi Omololu Olunloyo claims Bianca was a frequent visitor to Femi Fani Kayode’s apartments in London back in the 80s.

Please guys settle this fight. Enough of washing your dirty linen in the public.

Please let the elders come and intervene in this matter. It’s getting out of hands.