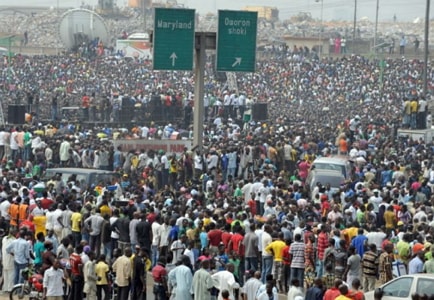 In 2017, World Poverty Clock predicted that this year, Nigeria would overtake India as the country with the highest number of poor people in the world. True to that prediction, the country has overtaken India (which was at the bottom of the ladder until last year), and is now wearing the cap of the world’s poverty capital. A report by the Brookings Institution, quoting data from the World Poverty Clock, shows that Nigeria now has over 87 million people living in poverty. If this is frightening, then, wait for the bombshell: six Nigerians become poor every minute. “According to our projections, Nigeria has already overtaken India as the country with the largest number of extreme poor in early 2018, and the Democratic Republic of the Congo could soon take over the number two. At the end of May 2018, our trajectories suggest that Nigeria had about 87 million people in extreme poverty, compared with India’s 73 million. What is more, extreme poverty in Nigeria is growing by six people every minute, while poverty in India continues to fall. In fact, by the end of 2018 in Africa as a whole, there will probably be about 3.2 million more people living in extreme poverty than there are today.”

So that we can better appreciate what we are talking about, what is poverty in this context? It is defined as living on less than $1.90 a day at 2011 purchasing power parity prices. Even at today’s exchange rate in Nigeria, that is about N720. A lot of money, isn’t it? When you get to the market you’ll know how little it is.

One good thing is that so far, I have not seen any negative reaction from the Federal Government, unlike in previous assessments. This is uncharacteristically Nigerian. Nigerians may not be in the position to say categorically that their country is home to the world’s poorest poor; but they know that millions of their fellow citizens live below the poverty line. As a matter of fact, the figure of the poor given by World Poverty Clock would appear too small when we consider the ever-increasing army of ‘executive beggars’ that dot the landscape in recent years. At any rate, what is there to dispute when even our own National Bureau of Statistics had painted a grimmer picture in 2016 when it reported that about 112 million Nigerians live below the poverty line?

When, as reported in Ekiti State a few years back, someone had to keep vigil until a neighbour who was preparing ‘amala’ left the kitchen to fetch something from the room and then carried the pot of ‘amala’ on the fire and took it to her apartment before the owner returned and began to eat it without soup with her children, then you know that really, poverty is based here. The other time somewhere in the north, a man had to use his son as collateral when he bought a bag of rice without having any money on him. He pretended as if he forgot the money at home and told the rice seller to hold his son while he took the bag of rice home, from where he hoped to bring the money for the rice. He never returned with the money and when traced to his home, it was discovered that he actually had no money to pay. We have had instances where some parents sold one of their children in order to be able to feed the remaining children. There are many cases of mothers whose newborn babies were seized in hospitals because the parents could not settle hospital bills. There are countless such mind-boggling stories.

Yes, mind-boggling because that is not God’s wish for this country. If God had wanted Nigeria to be the Wretched of the Earth that she is now, He would not have endowed us with the human and natural resources that the country is blessed with. It may be an exaggeration to say Nigeria has the highest number of churches and mosques in the world. But we have quite a surfeit of both; that this is not reflecting in the way we live is the jigsaw puzzle. We are so close to our churches and mosques; yet so far from God. Unfortunately, we also lack the capacity to tame corruption, which is the real cankerworm that is stunting the country’s growth. Until very recently, the country has been dancing in circles with graft cases involving especially the politically exposed persons in our midst, otherwise referred to as the big or untouchable thieves.

The World Poverty Clock, created by the Vienna-based NGO, World Data Lab, in 2017, is a tool to monitor progress against poverty globally and regionally. Funded by Germany’s Federal Ministry for Economic Cooperation and Development, it provides real-time poverty data across countries. Although it is relatively young, by virtue of its coming into existence only last year, it has set criteria on which it based its assessment. What the body does is to update its data every April and October, to take into account new household surveys and new projections on country economic growth from the International Monetary Funds’ World Economic Outlook. These then form the basic building blocks for poverty trajectories computed for 188 countries and territories, across the world.

A major factor that has put Nigeria in this hall of shame is the lack of social safety nets in the country. For instance, if we had these, the state would naturally have a funding arrangement for indigent expectant mothers such that they would not be ‘detained’ in hospitals with their babies on account of inability to pay bills. Similarly, people would not be keeping vigil in expectation of the time their neighbour would briefly step out of the kitchen before stealing their pot of ‘amala’ or soup on fire if stipends are handed out to people without jobs.

So, what do we do to get out of this mess? Simple. It is the same prescriptions that have been made several times that, sadly, one must repeat here, in the expectation that, perhaps, when we keep harping on them, the governments would see the urgency in accelerating the pace of development. Infrastructural development is key to any meaningful attempt to get out of this poverty conundrum. Yet, we have a huge infrastructural deficit, and one in which our National Assembly legislators do not seem to appreciate its enormity. If they do, they would not be slashing budgets for roads, etc. while raising their own budget. Improved power supply must be taken beyond rhetoric.

Railway must be developed. The disaster that happened in Lagos on Thursday on Otedola Bridge, which claimed several lives and property, including vehicles would have been averted if we had a functional railway. We do not have to be transporting fuel by road. We need to do more on agriculture. We need to do more functionally by way of diversification of the economy. It is when we do all these and more that we can stimulate the economy, job creation and the increased spending would reflect in reduced social tension and crimes.

I know our brethren would say “I reject it in Jesus’ name” when told that Nigeria is the world’s poverty capital. They will add, to boot, that “it is not our portion.” But, beyond rejecting it, we have to take practical steps to snatch our fate from those who have sworn to mess up our lives and the lives of our children. We have to do something about this National Assembly. We have to device a means of making governments at all levels more responsive and responsible. The other time, we were adjudged the happiest people on earth. Today, they say we are the world’s poorest capital. While the former is sarcastic, the latter is real. But none, at the end of the day, is complimentary.

Vote Or Cry: Who Deserves To Lead This Digital Generation?
Nigerian Doctor Who Slapped & Beat Up Nurse At Ibeju Lekki Lagos Hospital May Be Mentally Unstable