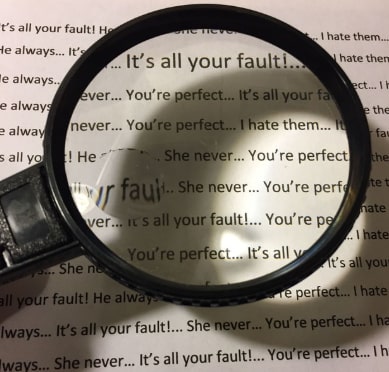 Magnifying Other People’s Mistake: How Guilty Are You?

Counting and magnifying other people’s faults and mistakes doesn’t make you a saint or better than them. Human expectations are insatiable! If you live your life wanting to satisfy people’s expectation, you will end up the most miserable person on earth. Bill Cosby once said, “I don’t know the key to success, but the key to failure is trying to please everybody.” Some people will never see any good thing about you except your mistakes. They have keen eyes for the mistakes of others.

Magnification, also known as catastrophizing (Ellis and Harper, 1997) occurs when a negative event, mistake, imperfection is blown totally out of proportion.As a personal development and empowerment coach, I do more of celebrating people’s uniqueness than fixing them. Some people don’t really need fixing because they are not broken. They are actually uniquely wired and really need to be celebrated. When you move around like you are a “Mr. Fix It”, you will always see people’s uniqueness as an error that needs to be fixed, instead of a unique masterpiece that needs to be celebrated.

There is a story that really illustrates the psychological drift of man from focusing on the good in others to magnifying their mistakes:

One night, just before the shopkeeper was about to close the shop, a dog came into the shop. There was a bag in its mouth. The bag had a list of items to be bought and money. The shopkeeper took the money and kept the items in the bag.Immediately, the dog picked up the bag of items and left. The shopkeeper was surprised and went behind the dog to see who the owner was.

The dog waited at the bus stop. After sometime, a bus came and the dog got into the bus. As soon as the conductor came, it moved forward to show his neck belt which had money and the address as well. The conductor took the money and put the ticket in his neck belt again.When it reached the destination, the dog went to the front and wagged his tail indicating that he wanted to get down. The moment the bus stopped, it got down. The shopkeeper was still following it.The dog knocked on the door of a house with its legs. Its owner came from inside and beat it with a stick.

The shocked shopkeeper asked him, “Why are you beating the dog?”, to which the owner replied, “He disturbed my sleep. It could have taken the keys with it.”This is the truth of life. There is no end to the expectations people have from you. The moment you go wrong, they start pointing at your mistakes. All the good done in the past is forgotten. Any small mistake committed then gets magnified. This is the nature of this material world.You can do 100 things for people, but once you do a little mistake they forget all that you have done for them. They capitalize on that your little mistake to hold it against you whereas they themselves aren’t perfect. The owner of the dog had no idea of what his dog went through to get those stuffs, yet instead of appreciation it got beating.Most people have no idea of what you have gone through in life to make them happy or please them but at the end of it all, instead of them appreciating you or complementing you they end up looking for faults and mistakes from you just to discredit you. This is the kind of society we live in!

Constant interaction with people who magnify the mistakes of others can seriously damage our self-esteem. Why will some people always only see the flaws of others and zoom in on them? This psychological and temperamental anomaly can ruin relationships, destroy marriages and wreck families. I have listed some core causes of this social misdemeanor for people that are actually willing to work on themselves.

INSECURITY:Baylor Barbee said, “Relationships fail because people take their own insecurities and try and twist them into their partner’s flaws”.Insecure people can only feel better about themselves by pointing out the flaws of others. This category of people blanket their own insecurity by discrediting others. In fact, the more they magnify the mistakes and faults of others, the more they feel good about themselves. When a man is insecure, everyone around him is always inadequate. A healthy self-esteem is the greatest asset of any person; it ensures that we see everybody as a collaborator and not a competitor. An insecure person will always ruin other people’s happiness just because he can’t find his own!

SELF-DEFENCE: Some people defend themselves by deflating others! The tendency to criticize everything and everyone is most times a defense mechanism. In practice, the person needs to justify his or her unsatisfactory way of life by discrediting others. Some people are really afraid of being vulnerable and will always defend their own weaknesses by magnifying the mistakes of others.

UNHEALTHY EXPECTATIONS:Bill Lemley once said, “When nobody around you seems to measure up, it’s time to check your yardstick”.When people have unhealthy expectations of others, they often focus on the inadequacies in others rather than appreciating their little efforts. It is good to have high expectation of others, but it must be complementarily healthy or else it becomes toxic. Unhealthy expectation strains relationships and makes others look as if they are incapable.

SUPERIORITY COMPLEX:This is a condition where individuals project an exaggerated feeling of being better than others.Some people feel superior when they run down others. Superiority complex is a psychological defense mechanism that compensates for an inferiority complex. The term was coined by Alfred Adler as part of his school of individual psychology.

ABUSIVE TENDENCIES: I have often observed that abusive people are flaw seekers! They erode your confidence in yourself by letting you know how inadequate you are. They need to destroy your self-confidence because it is the only wall that hinders them from having an unhindered access to manipulate and control you. The easiest way to abuse people is to make them feel inadequate. Abusive people will magnify your inadequacy in order to dwindle your self-esteem.

FINDING FAULTS AND NOT REMEDY:Henry Ford once said, “Don’t find fault, find a remedy.”The people we live with are imperfect human beings. They have faults, they make mistakes and let us down on many occasions. Mahatma Gandi said, “Freedom is not worth having if it does not include the freedom to make mistakes”. We must make allowances for people’s mistake instead of magnifying it. When we are so much focus on finding faults in people, it becomes all that we will ever see! We must have a keen eye for finding solution instead of finding faults.

Focusing on other people’s problems makes them feel better about themselves and helps them avoid working on themselves. Avoid these kind of negative people. You may actually need to ‘block’, ‘unfriend’, and ‘unfollow’ this category of people in real life. Spend more time and energy on positive, uplifting people. Don’t allow someone to always compare between you and others. The right people will always help you see how you can exceed yourself and not others.

Is your magnifying glass pointed at the wrong things?  What are you making bigger than it needs to be? Are you making a mountain out of a molehill?  In the big scheme of things, is this really a big deal?Are you looking at people’s mistake in a larger-than-life form?  When you measure this imperfection, mistake, or disappointment against all the good things about the person, you’ll quickly see that this situation isn’t worth the energy you’re giving it.

Move the magnifying glass!  Move your focus from what they do wrong to what they do right. Acknowledge others and their accomplishments.  If you’re finding yourself critical of or angry or disgusted with someone, you’ve likely had tunnel vision on their imperfections.  Sit down and make a list of their strengths and what they contribute positively.

Some people are only skillful in pulling others down. They lack the ability to encourage and empower others. Don’t join them!

QUOTE OF THE WEEK: “Some people defend themselves by deflating others”-Gbenga Adebambo