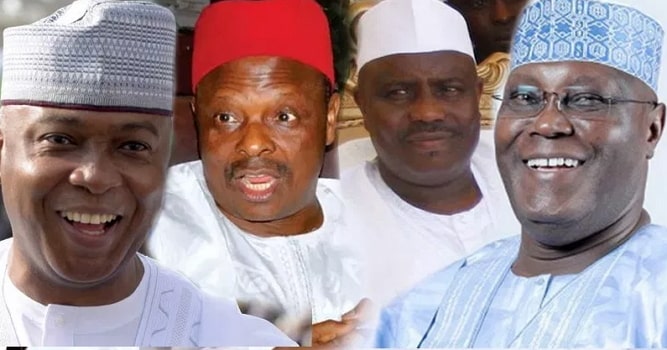 It appears the Nigeria political landscape will never fall short of innovation and surprise. In the current nationwide exercise at arriving at 2019, new innovations have emerged which constantly enlivens the political process.

In the past, the naira was the medium of exchange, even at party fora. But because of the dynamic nature of the Nigerian political process, new innovations have suddenly come up to make Nigeria always ahead of other countries in Africa if not in the whole of the developing world.

The never to be forgotten Port Harcourt presidential primaries is the most innovative in selling and buying of votes, much ahead of the real balloting. That process also revealed the information that in Nigeria today, our naira is not worth much. That was why the major contestants in the do or die contest were ‘sensible’ enough to employ the modern and realistic method of getting elected.

The summation of the above is that what we saw and complained of in Osun for example was a child’s play when compared with the innovative process that was introduced at the presidential primaries at Port Harcourt.

To many Nigerians, it does not matter where the politicians got their dollar, whether it was replacing the naira as medium of exchange in Nigeria or whether the process was legal at all. The beneficiaries – thousands of electorates went home happily; many equipped to start a small or medium size business using their ‘hard’ earned income for work done or support given in just 48 hours. Indeed some got so enthused that they openly prayed for the whole exercise to be cancelled to enable them earn a second harvest.

Can anybody imagine the disbursers of the dollar pointing accusing fingers at the dispensers of the lowly naira which allegedly happened earlier in some states? That is Nigeria, where the man carrying the mole in his eyes constantly points to the other with a mere speck in his brow. In all cases, the media went blank temporarily thereby ignoring the rain of dollars soaking everybody around.

The shame of it all is that these political processes and gymnastics are seen and observed elsewhere in the world. The label of Nigeria being one of the most corrupt countries in the world continues to exist as the Nigerian political manipulators, aided by the local press continue to rule the waves. In the long run, the Nigerian nation will carry the tag while individual politicians will continue to feel unruffled.

But there are fundamental issues involved here when you buy your way with dollars to be candidates of political parties and perhaps inadvertently you reached the position of governor or president. You would not be a judge between good and bad; you would not fight in any shape or form and would certainly end up administering a corrupt government.

Obviously, you can only give what you have. Since your climb to the top was clumsy if not outright dishonest, it is most unlikely you will be equipped to run a clean administration. This is a foreboding situation which may likely happen in Nigeria.