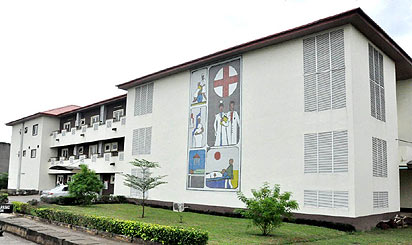 A fire outbreak on Thursday night destroyed goods and property worth millions of naira at Balm of Gilead Specialist Hospital and Marketing Centre, Ilesa, Osun.

The fire which started around 9 p.m lasted for about three hours before it was put off by firemen and good Samaritans.

Owolabi expressed dissatisfaction on poor service of the fire service, adding that unavailability of good fire fighter vehicle, scarcity of diesel and water among others contributed to the total loss of the whole resident.

He appealed to governments to provide adequate and functional fire fighter vehicles, sufficient diesel, water and other necessary materials used to quench fire outbreak in the interest of the citizenry.
According to him, the fire fighting vehicle is too old, and the water pipe not powerful enough to stop the inferno.

He expressed satisfaction that local water suppliers was eventually used to stop the fire from razing down the hospital buildings, adding that the hospital lost everything inside the six bedroom flat.

In his remark, the Zonal Commander, Ilesa Zonal Fire Station, Mr Hammed Agboola, confirmed the incident, saying that the station tried all its effort to quench the fire.
Agboola warned that people should always switch off all their electrical appliances when leaving home or business premises.

He added they should also ensure that their electricians used original cable wire for their connection.