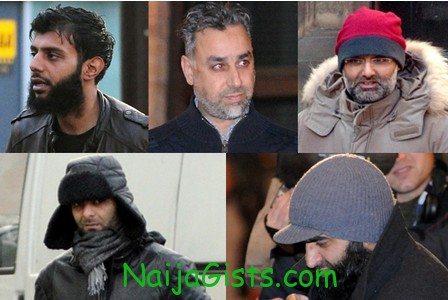 5 Muslim men mentioned below are currently on trial in UK after being accused of a hate crime by handing out leaflets calling for gays to be burned or hanged.

The men, Razwan Javed, 28, Kabir Ahmed, 28, Ihjaz Ali, 42, Umer Javed, 38, and Mehboob Hussain, 44, all resident of Derby suburb are said to have distributed the leaflets outside a mosque and pushed them through letterboxes before a Gay Pride parade. naijagists.com

According to The Sun, One of the leaflet reads; Entitled The Death Penalty?, included a picture of a hanged mannequin. It said a death sentence had “already been passed on every homosexual” and the only issue was whether they were hanged, burned or stoned.

Another was entitled Turn or Burn and featured a blazing lake as an image of hell. A third told gays: “God abhors you” and warned of “severe punishment”. A gay man who was handed one of the leaflets told Derby Crown Court: “I felt it meant I was going to get burnt. I’ve never seen anything so disgraceful. It made me feel physically sick.”

The accused pleaded not guilty by denying distributing any inciting leaflets.

British prosecutor, Bobbie Cheema described the message on the leaflets as “horrible, frightening and nasty”.

“One of the ways we organise our society can be summed up in the phrase, ‘Live and let live’. This is about the antithesis of that approach.” She said.

How A Wicked DPO Killed An Innocent Man On The Street Of Lagos
RIP Ademola Aderinde: Occupy Nigeria Protester Shot Dead In Lagos