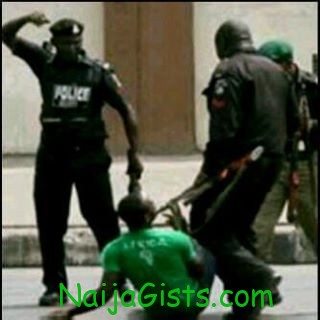 Ademola Aderinto before his death

We  learnt that Alkali ordered the arrest of Fabunmi, a Chief Superintendent of Police, CSP, who allegedly shot dead Demola Aderinto, one of the youths playing football on a street at Ogba, Ikeja, Lagos, Southwest Nigeria, during today’s nationwide protest against the fuel subsidy removal.

On Monday afternoon, Alkali ordered that the killer DPO be detained at the Special Anti-Robbery Squad, SARS cell in Ikeja pending the investigation of the incident.

The state Police Command spokesman, Mr. Samuel Jinadu, a Deputy Superintendent of Police, DSP, confirmed to P.M.NEWSthat the DPO has been arrested and is currently being interrogated over the incident.

The late Aderinto was playing football with some other young men when the DPO and his men stormed the area.

The DPO and his men allegedly shot into the air to disperse the harmless street footballers. But when they refused to be intimidated, the DPO and his men opened fire on them, killing Aderinto while three others were severely injured and were rushed to a nearby hospital.

See the picture evidence of Police Force Brutality below. Viewers discretion is advised 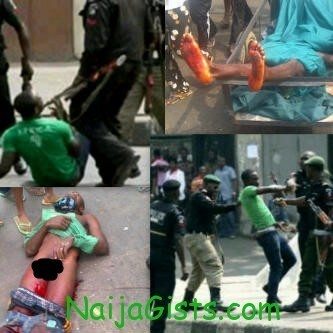 Fabunmi and his men lied that they opened fire on the defenceless footballers because they attempted to disarm them.

Chairman Ifako-Ijaiye Local Government Area of Lagos State, Apostle Oloruntoba Oke, who visited the Pen Cinema Police Division demanded for justice, adding that the autopsy report on the deceased might confirm the police claim or otherwise.

He condemned the unwarranted attack on innocent citizens in the council area and called on the residents to be calm and not to allow the crises degenerate further.

This innocent soul deserves justice. May his soul rest in peace.

May this killer DPO, Segun Fabunmi, son of a b***h burn in hell.