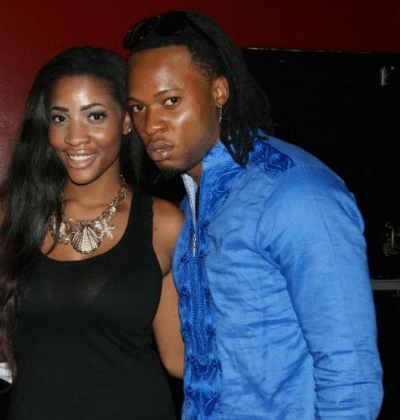 This is definitely a season of proposals, engagements, introductions and weddings. We’re still panting from the effects of 2face Idibia’s Valentine’s day proposal.  https://naijagists.com

Beverly who is currently in the US confirmed the news to popular blogger Linda Ikeji.

When asked about her current relationship with Flavour she said ‘it’s true, we are engaged‘, Beverly said.

We are told Flavour proposed to Beverly on Valentine’s day over the phone. A day later Beverly tweeted, ‘My best Valentine gift was my engagement ring and something also very special .. Good Night everyone and enjoy tonight #XOXO‘.

Flavour’s manager Benjamin tells NET the pair are involved and prepping for marriage. ‘Yes it’s true, yes they are engaged’, he told NET in a telephone conversation. He however would not comment on the rumours that Beverly is already pregnant for the Enugu-born singer.

We’re unable to confirm when the couple began dating but insiders say in spite of Flavour’s busy tour schedules they have been able to hook up once or twice in the last three months. The couple performed separately at the Ayva Center in Houston, Texas last December and met up again in January when Beverly paid a three weeks visit.

Meanwhile Flavour was out last night, to support Wizkid at Industry Nite. He made no comments on the news of his engagement and was shielded by bodyguards all through his stay.