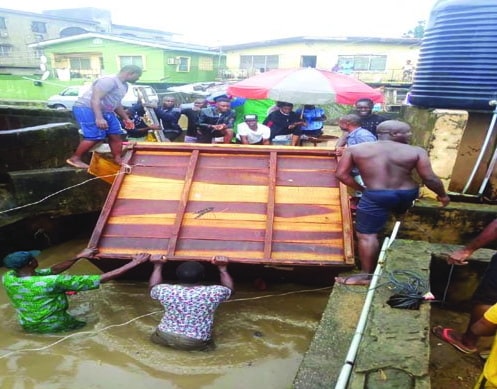 Panic was the order of the day in Shogunle Lagos over the weekend when residents counted their losses to a monster flood.

The heavy downpour that started on Friday lasted yesterday with damage to properties.

According to residents, the flood which was caused by poor drainage system entered shops and homes and left many homeless and shop owners in debt.

Here is what a resident told the Nation reporter, Elvis Ogboanoh on Saturday:

“I rushed out and all I could see was water everywhere. When I opened my shop, it was filled with water; the whole road was covered with flood which damaged the properties of the residents. The flood was heavy; it dragged a container shop used for lotto inside the canal. I am lucky because I don’t sell consumables. The people that were affected were my neighbours that sell consumables. It was only my generator, television and standing fan that was soaked but all my sellable goods were intact.”

“This is what we experience whenever it rains heavily. The flood dragged cars, motorcycles and tricycles into the canal.”