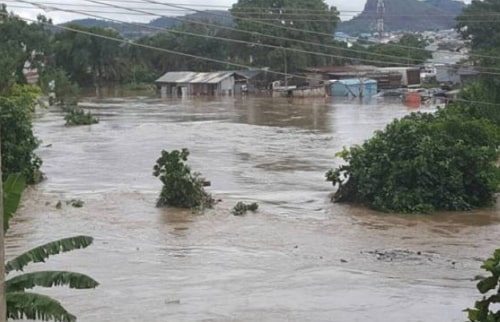 At least 141 communities were hit by the flood that swept through various parts of Adamawa in October, according to Dr Muhammadu Sulaiman, Executive Secretary, Adamawa State Emergency Management Agency (ADSEMA).

Sulaiman told the News Agency of Nigeria (NAN), on Wednesday in Yola that 7,666 houses were destroyed by the disaster.

According to him, 101,929 farmlands in seven local government areas were also destroyed by the flood that affected 173,049 people.

He said that the floods resulted from the volume of water in River Benue, adding that those displaced had been camped in nine temporary Internally Displaced Persons camps.

Sulaiman said that the flood destroyed about 60 per cent of rain feed crops in the affected areas, and expressed fear of possible hunger if urgent measures were not taken to avoid famine.

The executive secretary appealed to the federal government and other relevant humanitarian agencies to assist the affected communities with relief materials and dry season farming inputs.

Alhaji Muhammadu Gidado, the District Head of Ribadu, who also spoke with NAN, said that the flood affected farmers in all the 11 wards in his district.

Gidado, who is also the Chief of Fufore, said that he was disturbed by the level of destruction to farmlands in the district, saying that there was nothing left to feed their families.

“Farmers in the 11 wards lost everything to the flood.

“Now, they cannot harvest 10 bags of any crop because of the flood.

“I fear possible famine if government does not intervene immediately,” he said.

Alhaji Ilyasu Harun, a large scale rice farmer from Tingno village in Lamurde, told NAN that he had lost everything to the flood.

“I am still shocked by the level of devastation caused by the flooding this year,” he said..

Mr Aron Audu, another large scale rice farmer from Wadugu village in Lamurde, said that he usually harvest an average of 5,000 bags of rice every year.

“This year, it will be difficult to harvest up to 100 bags of rice because of the flooding.

“The most painful aspect of the whole thing is that l spent all my resources on the farm before the flooding,” he fumed.

Mr Isa Danjuma, a vegetable farmer in Girei, told NAN that the flood washed away his four hectares of farmland where he planted Okro, Onion, Tomato, pepper and other vegetables.

“The flood is receding now and farmers are trying to clear all the debris to prepare for the dry season farming.

“Our major concern now is that the prices of germinated seedlings of Tomato, Onion and Pepper have risen from N5,000 to N20,000 per kilogramme ” he said. (NAN)

Continue Reading
You may also like...
Related Topics:2019, Adamawa, Flood