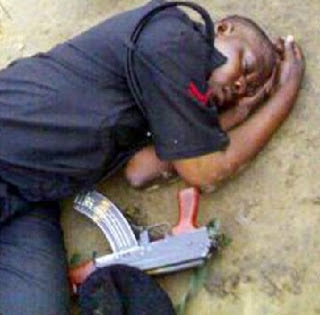 A married father of four, police sergeant Jude Nwadudu died on Easter Sunday at an undisclosed hotel in Iju area of Lagos.

According to eyewitnesses, the deceased lodged at the hotel with the aim of having a good time with a female friend but sadly he slipped and hit his head on the floor in the bathroom shortly after the two cooled off on the bed.

His girlfriend raised an alarm when he became unconscious in the bathroom.

He was rushed to LUTH in Idi Araba where he breathe his last breath.

His wife, Ruth Nwadudu, a fellow police sergeant was not aware of his extramarital affair until after his untimely death.