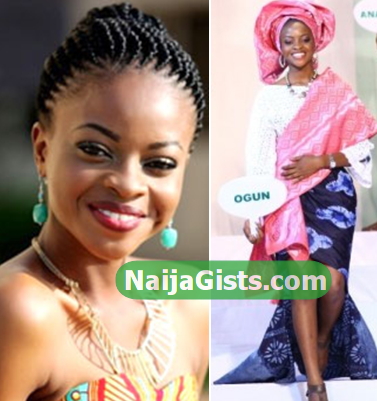 The suspects who were two men and a woman were said to have claimed to be security operatives working for the organisers of Miss Nigeria beauty pageant.

Vanguard gathered that the suspects who had been arrested by policemen attached to the governor’s office,  Oke-Mosan, Abeokuta reportedly took ex-Miss Nigeria in their car from Lagos to Abeokuta.

It was further gathered that the suspects, who rode in a  Honda Shuttle car with number plate  LAGOS, KA 35 EKY were said to have ordered the former beauty queen to enter their car from Lagos to Abeokuta to retrieve her car gift, Hyundai with number plate LAGOS GGE 354 AJ  where she parked it.

Attempt by the suspects to take the car away from the Arcade ground of the Ogun State secretariat complex in Oke Mosan, Abeokuta, however, met stiff resistance as the mother of the ex-beauty queen raised the alarm that attracted people to the scene.

The suspects who reportedly claimed to be police officers, however, failed to identify themselves when security operatives attached to the office of the state governor intervened.

Speaking with newsmen over the development, former Miss Nigeria,  said the people  had  been chasing her  round the  place, asking  her to surrender the car gift she got from the Akwa Ibom State government.

Narrating her ordeal, Feyi said: “Organisers of the programme made many promises that they didn’t keep and now they want to collect the car given to me by Akwa Ibom State government.

“They want to collect this gift from me because Ogun State government has given me another car so I must surrender the one given to me by the Akwa Ibom State governmet.”

Feyi further told newsmen that  there was no part of the contract she signed with the organisers that they will retrieve the car from her, stressing that the Hyundai car was registered in her name.

Feyi’s mother, Mrs. Mary Sodipo, told newsmen that she decided to raise alarm so that the suspects who had coerced her daughter to take them to where she was keeping the car would not harm her.

At press time, the three suspects were being detained at Ibara police station for onwards transfer to the command’s headquarters in Eleweran.