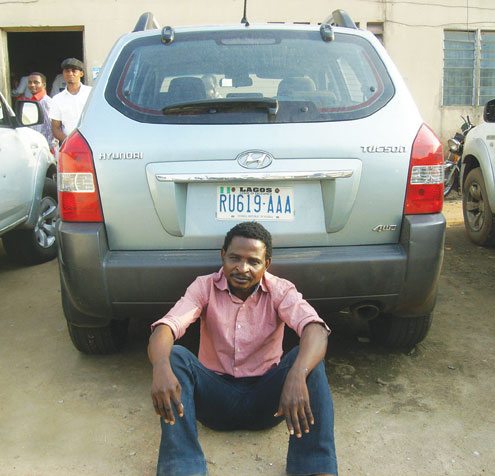 Beautiful One, with stolen SUV

Sunday Audu Turaki, popularly known as Beautiful One who claimed to be a former student of the University of Lagos, UNILAG who was reportedly expelled over his alleged involvement in cultism, has been arrested by men of the Special Anti-Robbery Squad, SARS in Lagos for allegedly stealing a Hyundai SUV worth N5 million.

According to PM news, the light silver green Hyundai Tucson Sport Utility Vehicle with registration number RU 619 AAA belongs to an Indian national, Samgee F. Aswaw, a friend to the chairman of the company where the suspect, Turaki works as a logistics officer.

Further investigations revealed that the suspect who was known as the Beautiful One during his cult days at UNILAG, removed the car where it was parked at the car park at LSDPC building, Victoria Island, Lagos, southwest Nigeria.

Sunday Turaki allegedly drove the car to Benue State with a view to selling it to Mallam Hassan who said he could not buy the car because he does not like it.

Turaki then promised to look for another buyer for the car.

But before he could get a buyer, Turaki got a call from the police in Lagos that his sister and other family members have been arrested and detained at Bar Beach Police Station in Lagos Island over the missing Hyundai car.

When he received the call, Turaki reported at the police station, and he was arrested, and detained for about a week. The vehicle was later recovered from Benue State.

It was learnt that the suspect refused to cooperate with his interrogators because they knew him at Bar Beach Police Station as an impersonator who had paraded himself as a lawyer.

He was later transfered to SARS, where he later allegedly confessed to the crime.

Sunday was reported to have confessed to belonging to cult group and was expelled from the university because of his involvement in cult activities.

One officer at SARS told P.M.NEWSthat the suspect may be arraigned in court soon, after the completion of police investigation. (By Ayodeji  Dedeigbo)