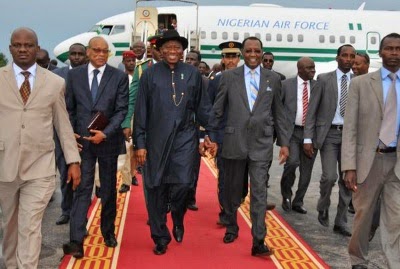 We followed up with two intelligence articles in early September, “The #JanjaweedConnection: Boko Haram Unraveling” and “Boko Haram: Jonathan, Ihejirika Supervised Foreign Invasion of Nigeria’s Oil Rich Northeast,” in which we directly implicated and connected the Chadian leadership, the named Nigerian Boko Haram sponsors, an ex-governor of Borno, Ali Modu Sheriff and the former, illegally-in-office Chief of army, rtd. General Azubuike Ihejirika as well as the Nigerian President, Goodluck Ebele Jonathan in the grand ploy to enable this powerful, French, foreign invasion and occupation/annexation of the nation’s north.

This was the first time that the Chadian and Nigeria’s other French neighbors as well as France would be directly implicated in the intractable Boko Haram devastating crises that has led to the loss of over a hundred thousand lives and billions in property as well as the sovereign territory of Nigeria. We warned Nigeria about the risks posed by the clueless or deliberately terror facilitating Jonathan leadership and requested global assistance to combat an externally orchestrated and locally permitted and assisted devastative occupation of Nigeria. We revisited the initial attempts by French-Chad to occupy parts of the northeast in the 70s and 80s which were obstructed by Nigeria under the leadership of General Muhammadu Buhari and democratic President, Shehu Shagari who retook 19 Nigerian Islands from the Chadian Habre Gendarmes. Chad has long interests in annexing parts of Nigeria as does Cameroon.

Rather than pay attention to this information, the Nigerian Jonathan-leadership continued to assist the foreign interests in their mission to occupy the nation’s northeast. The Jonathan government paid millions of the Chadian leadership for a sham ceasefire deal with the terrorists in an organized scheme plotted in a meeting held with the Nigerian President, Goodluck Jonathan, Ali Modu Sheriff of Borno and Idriss Deby in attendance. These scheme was plotted to delay and purchase time for Boko Haram to regroup and continue its successful genocide. Recently a helicopter that crashed in Yola was found to be carrying up to 6 million dollars in hard cash. Eye witnesses reported that the passengers, two of whom were White, ordered the chopper to be immediately set on fire with the millions in cash-for-terror and arms-for-terror it was ferrying, burnt to conceal all evidence. Half burnt dollar bills were collected after the inferno.

Nigeria’s leadership was never held to account for supporting this foreign attack. International players have since resisted delivering harsh judgments on the Jonathan government and the governments of Chad, Cameroon and Niger who have been implicated in sponsoring and supporting terror against the defenseless people of the three States; this in spite of clear evidence of the supply of arms, ammunition and millions of dollars in finance by France, Cameroon and Chad to Boko Haram and the use of these territories for training of the terrorists and arms smuggling over the years as our reports detailed. Our reports also named several of Boko Haram’s top leaders who were French agents from these neighboring countries; and also Abu Mahjin, a Chadian globally listed terrorist who initially came to Nigeria to establish Boko Haram.

On October 6th, an ENDS member contributed, “Nigeria Deserves Explanation From France On Terrorism Due To Its Involvement In The Nigerian Civil War, The Bakassi Dispute, Oil Theft And Recently The Translation Of Boko Haram Video By The French Media,” and on October 18th, ENDS released the article ultimately linking Chad President Idriss Deby with Boko Haram: “Idriss Deby: the President For Boko Haram.” Yet nothing was done. Nigeria’s Senate, “Traditional and local elders” and foreign players including the United States, the United Nations, the African Union and all other players with capacity to check the invasion and genocide continued to ignore the reality of the government sponsored terror despite all evidence.

We urged for a full declaration of a state of war by Nigeria against Cha and Cameroon, for their direct involvement in orchestrating terror in Nigeria. The Nigerian leadership Elite however as we have proven have personal (oil) business interests in Chad and is in working in suit with the Chadian leadership to destroy and occupy the north of the nation… with this pogrom being utilized as a means for the political tarnishing of Jonathan’s perceived opponents, persisted in denial of this real deadly situation and avoided our announcements.

Today according to latest reports, the Chadian Presidency has been most distressingly caught supplying arms to Boko Haram terrorists. A political aide of President Idriss Deby was reportedly apprehended at the Chad-Sudanese border with missiles for Boko Haram. According to the report, Mahamat Bichara Gnoti “claimed that President Idriss Déby gave him the funds to purchase the weapons,” and had “waved a presidential pass issued to him by Mr. Deby’s office in order to get past border guards but was stopped and searched by the guards who found the deadly weapons on him.”

Abandoned by the world, the people are left no recourse than to take justice into their own hands by any and every means necessary.

As we are left to be killed and displaced from our land; we declare the Presidents of Chad, Nigeria and Cameroon as the enemies of the people and whatever fair justice can be meted on them by the people any where they find them, should be delivered without restraint.
[By Perry Brimah, ENDS]