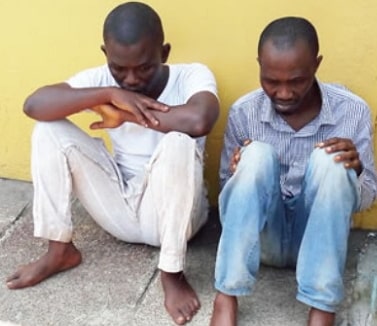 2 fake spiritualists who specialise in defrauding people have been arrested by the Niger State Police.

The spiritualists were said to have been trailed from Akure in Ondo state where they ran away from after hoodwinking a lot of unsuspecting people.

Those duped are usually those who come to them for spiritual help and healing.

The suspects, 52 years Olaiya Ojo and 48 years Awoyemi Ibrahim were apprehended by a team of policemen attached to Maitumbi Division based on a tip-off.

It was learnt that the suspects have been going about defrauding people of various caliber that need spiritual healing.

The suspects confessed to have been in the business for 10 years and were said to have defrauded many families in Ondo state and decided to relocate to Niger to continue their act.

But they met their waterloo when they were arrested by the police before they were able to perfect their act on unsuspecting victims.

Speaking when they were paraded by the Police, one of the suspects, Ojo said they never dreamt they would be traced by the Police to Niger state after they left Ondo.

“We never knew that one day police will get at us, we are paying the price and that is the end of the road and money making for us. We are convinced that we have ruined our lives, is unfortunate.

“We were notorious in Ondo, we moved to Niger state thinking that we continue our business as usual not knowing that we are getting to the end of the road.”

The Police Public Relations Officer, Muhammad Abubakar said police operatives recovered calabashes, one long rubber tube, white and red cloths and a bell from them adding that the matter would be soon charged to court .