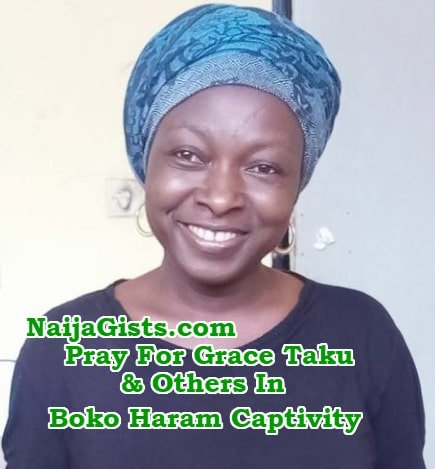 “I’m The Only Christian Among Them, CAN Should Assist Me”- Action Against Hunger Aid Worker Kidnapped By Boko Haram

Grace Taku, the aid worker kidnapped by Boko Haram terrorists, alongside five humanitarian workers and staff of Action Against Hunger (ACF) has appealed to the Christian Association of Nigeria (CAN) and the Nigerian government “to do something” about their release.

In a video clip released, Grace Taku, the aid worker kidnapped by Boko Haram terrorists on July 18 claimed that Leah Sharibu alongside one Alice has been killed by the insurgents because of the Federal Government of Nigeria’s inability to do something.

It should be recalled that Leah Sharibu was among the 110 Dapchi schoolgirls kidnapped from Yobe State by the insurgents.

The three minutes and 17 seconds video featured a veiled female nurse who identified herself as Grace Taku speaking on behalf of five other abducted men sitting behind her.

“My name is Grace. I work with Action Against Hunger, an NGO in Borno state. My base is Damasak.”

“We don’t where we are. At this moment, we don’t know where we are. I am the only Christian among them. I am appealing to the Christian Association of Nigeria to please assist and do something about me.

“I am also appealing to the Action Against Hunger, they should do something to make sure that we are released,” she added.